So I noticed this topic slightly get touched on here and there in the forum, but I decided to make a dedicated thread about it.

So the premsie is that I'm looking for a Firefox alternative as I'm fed up with their stuff.

Firefox was one of the first majorly adopted web browsers and even for a short period was the most used web browser. But their market share has dwindled ever since, losing users to rivals.
Before going down the rabbit hole, I'd like to mention the rendering engines the modern browsers use because it is a very big deal.
I'd say that there are 3 primary rendering engines that 95% or more of the browsers use. Chromium, Gecko, and Webkit. Most of the famous browsers use Chromium (i.e. Chrome, Edge, Brave, Opera, etc.) which is developed by Google. Gecko is primarily used in Firefox and some Firefox forks like Waterfox. Webkit is primarily used in Safari. The key detail here is that last time I checked, more than 90% (a figure between 90 to 95%) of the Web browsers use chromium as their rendering engine.
This makes these browsers more or less the same thing. Seriously, there is no difference between Edge and Chrome except from some minor visual differences. I won't go into detail as why this is such a bad thing and how Google has used and is using this to essentially dissolve competitors like Firefox, but if you are interested, look it up. It is very interesting.
I've been using Firefox because honestly, I didn't find a better option. I hate Mozilla and their ethics. They are not trustworthy. Yet, I'm stuck with them.
I want to move away from Firefox, but I haven't been able to find a good or even on-par alternative to it. Before going over the alternatives I'd like to mention that for me, all of these web browsers fall into one of these two categories.

So let me go over some of the alternatives in no particular order:

Vivaldi for one.
Their Android version is also excellent.

Not only Vivaldi is Closed source, but it also uses Chromium. I also remember they have a terrible record of dealing with private user data.

Vivaldi is a Chrome fork. The app version also totally went sideways on my phone - and their support forum was no help. I removed it from my phone with gusto.
I really liked the Customizaility and features of Vivaldi. But then it began filling my processes with vivaldi-bin - All processes. It would slow the entire computer, then crash.
Even though plenty of other threads existed of the same problem - the Vivaldi support forum acted like they never heard of it.
The final straw was when it Broke Zorin OS in some incomprehensible way and I had to wipe and reload.
I kicked Vivaldi to the curb and they are staying there.

I thought that issue was for Opera.

Then your only option is elinks

ELinks is a feature-rich program for browsing the web in text mode. It is
like enhanced Lynx and Links. The most noteworthy features of ELinks are:

But that's not even a browser

I can't check my mail with it, I can't even post to this forum with it. Maybe 35 years ago, I would've dared to look in to xD but nowadays it just doesn't cut it. 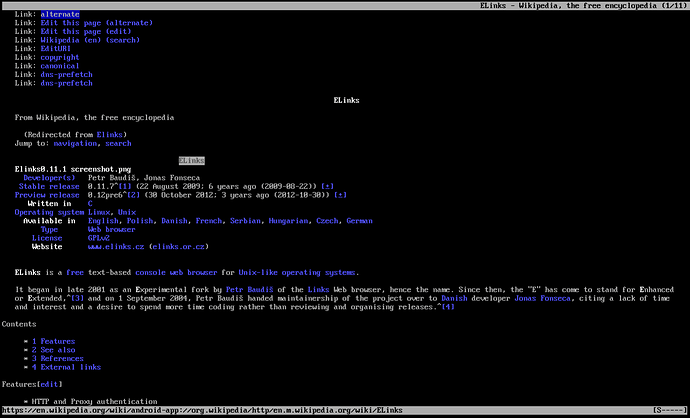 Cannot read that with a straight face

There you go. You can now mark the thread solved.

wait, do not forget this one!
http://links.twibright.com/

Hahaha they can't be serious,

This is the first thing written on their website. They can't be serious xD

On a serious note; what about ungoogle-chromium. ? I saw it as a flatpak, I don't know if there's a .deb

It's Chromium... that's the problem! But yeah there are .deb, .appImage, and other formats available.

Debian, Ubuntu, and others packaging for ungoogled-chromium

Yep. Always has been

Well, the netsurf one at the very least has a GUI, I'll look more into it.

Yes, since MS abandoned their own engine.

A shame, competition would have been good.

at the very least has a GUI

You made me laugh so much. I almost choked on my coffee.

Indeed any GUI is better than no GUI.

Just to add, I was using NetSerf when I was running RISC OS on RaspberryPi. It worked quite well on the very limited resources - 1GB RAM.