This isn’t really Zorin focused but the topic applies to Zorin.

Firefox is featured on Zorin. Great. But if you want to pin web apps to the panel, you’re out of luck. You need Chromium, Chrome, or (likely) Edge. (And the process is really annoying in Linux for some reason.)

For a while I’ve simply accepted that pinning apps is a ‘Chrome’ thing. But then it occurred to me that it isn’t. Since pre-Chrome Edge on Windows did it. Not to mention that all a ‘web app’ really is a web page with a new simplified ‘shell’ around it.

So now I want to ask (out loud to smarter people than I) why Firefox doesn’t support pinning web apps? If it did many might not bother with Chrome-ish browsers. I know I wouldn’t.

For the uninitiated, pinning a web app takes an online page (Yahoo Mail, Google Photos, Maps) and PINS it to your panel like an app.

*What’s really awesome about it that it’s cloud by default. So if your PC buys it everything that’s pinned is already backed up. No making your data work with local clients. Pin Gmail to your panel and you’re up and running.

While this is a 9 year old thread, the option of using a Desktop Entry launcher should work, as outlined in answer 17:

How do I put a web application on the Launcher?

You can use line

as Unity is not applicable.

Many Thanks for the reply!

I did read all of that. lol Newbies need a much easier way of doing that. I’ve always kept icons on desktop for everything I use regularly… hate having to open menus to find what I want to do right now. I’m very happy to be moving forward with ZorinOS … one more mountain I must learn how to climb. I don’t even know how to make a file yet… lol

Very THANKFUL for you and Swarf !!!

In my cinnamon desktop, it’s right click then choose either “add to desktop” or “add to panel”…

I have many websites that I use regularly and having the icons on my desktop make that a lot easier and faster to do.

I just tried the ol’ Drag and Drop to see what would happen on my desktop. No good… But you might try it on yours and see what happens.

I will let you know if I get it to work. THANKS!
Gotta run now… late for check on patient.

I have many websites that I use regularly and having the icons on my desktop make that a lot easier and faster to do.

What I was discussing is a function that puts frequently used apps in the panel (taskbar). Chromium and Google Chrome offer this feature, but in Linux it’s a bit hinky. If you want to try it with one of those browsers I’ll give you a hand.

What you’re discussing, however, is different. You want webpages handy in Firefox. There’s a complicated way (creating and maintaining a bookmarks toolbar in Firefox) that is best if you have a hundred or so links. If you’re instead just talking about 18 or so faves, try this – 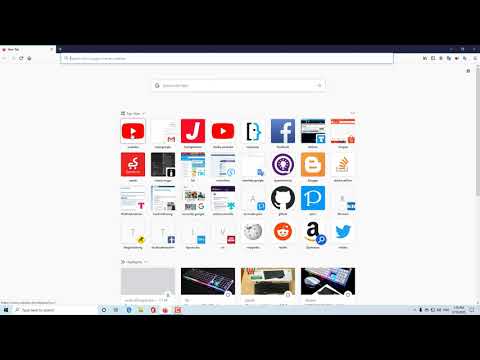 Thanks for your knowledge about this! I’m looking at the pic you posted and I’m going to try and do that. I’ll let you know if I’m successful.

Thanks so much for offering to help and for the picture and info!

I have ZorinOS Ultimate 15.3x64 running on other computers and I can’t make any shortcuts to desktop on them with Firefox… but
15.2 Lite 32 Bit does allow me to make shortcuts… They are all the same symbol that I know I could change but I like that fact… they blend in with my robot wallpaper.