Hi, I have this issue for more than 6 months now can't figure what's the issue. I have a 1080Ti and most of the time it's going well but on some occasion I have transparency trough new windows of chrome or the video app but not with VLC. I fix it by resizing the windows.

Also can't screenshot because it's not capturing the issue.

I recommend that you use the Proprietary 460 Driver, not the Nouveau Driver, on the Nvidia 1080ti.

Hi Aravisian, just a small note: the 460 driver does not seem available in a Zorin OS 16.1 install. For me at least, the currently recommended and tested version is 510. But I did do a fresh install only a couple of weeks ago, so maybe that changed recently.

It should be installable with:

I've installed with sudo apt install nvidia-driver-460 and reboot and the solution does not show in the update pannel. 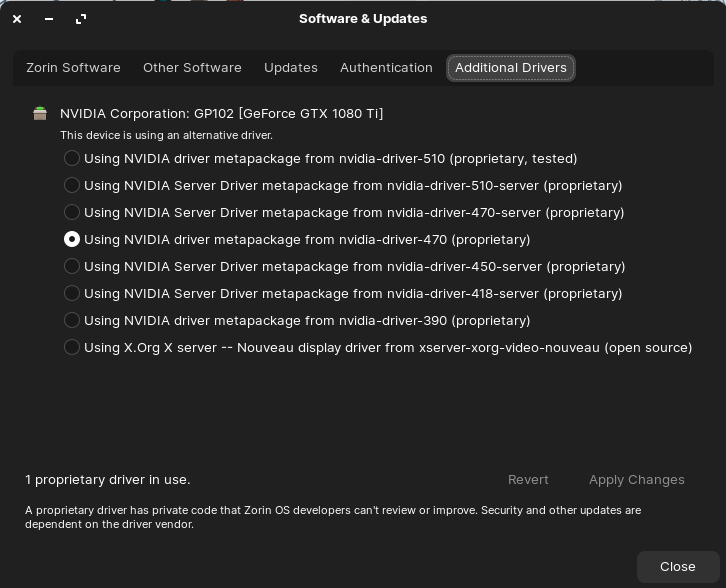 I guess I have to

How do I find the versions?

How do I find the versions?

did not showed in the Software & Updates, presume by the outpu it's included in the 470 package, downgraded to 450-server.

Did I mentionned that eveything problem below can be fixed by resizing the window?

Thanks for the help btw

presume by the outpu it's included in the 470 package,

Yes, in another recent thread we discovered this...

Anyone knows what could I try? I'm still stuck can't figure what's the issue.

If it was me, I would try a different kernel.

You can use apt search to locate a kernel version.
Boot into the kernel using the esc at Motherboard splash > Grub Menu Advanced Options for Zorin