How do I play "Mass Effect Legendary Edition" on Zorin OS?

I am a new user to linux and i want to install mass effect legendary edition on my linux setup. I installed steam and i "tried" to follow this tutorial 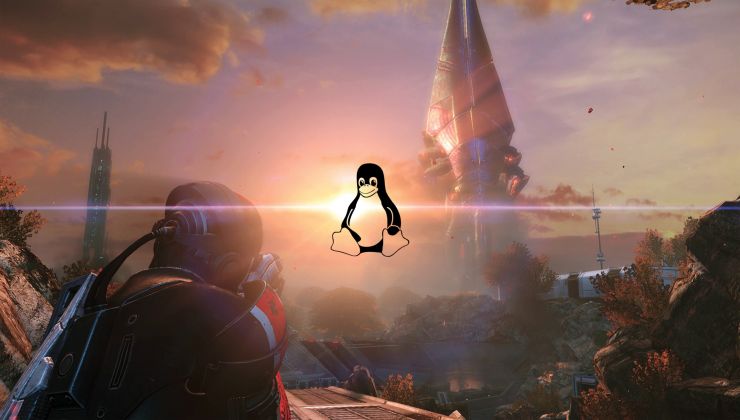 The big new release of Mass Effect Legendary Edition from BioWare and EA is only supported for Windows on PC, but with Proton GE you should now be able to play it on Linux.

but i get stuck in the proton part, i don't have root access and can't find the folder. Anyone has a good tutorial on how to ?

i don't have root access and can't find the folder.

Are you talking about this part?

If this folder does not exist, create it:~/.steam/root/compatibilitytools.d/

Just open your File manager, hit
ctrl + H
to display hidden files to see if you have this folder.
If you do not see it, you can create it by right click in the parent folder and select"create new folder" from the drop down list.

Yes that folder but i assum that must be created under home folder ? that folder i don't see. Personal map shows the home icon though

Yes, you need to create it in in your home directory.

Yes that folder but i assum that must be created under home folder ?

Why does it look different then when i look in the steam app it self ? I don't see the files i added (created the folder as you say) 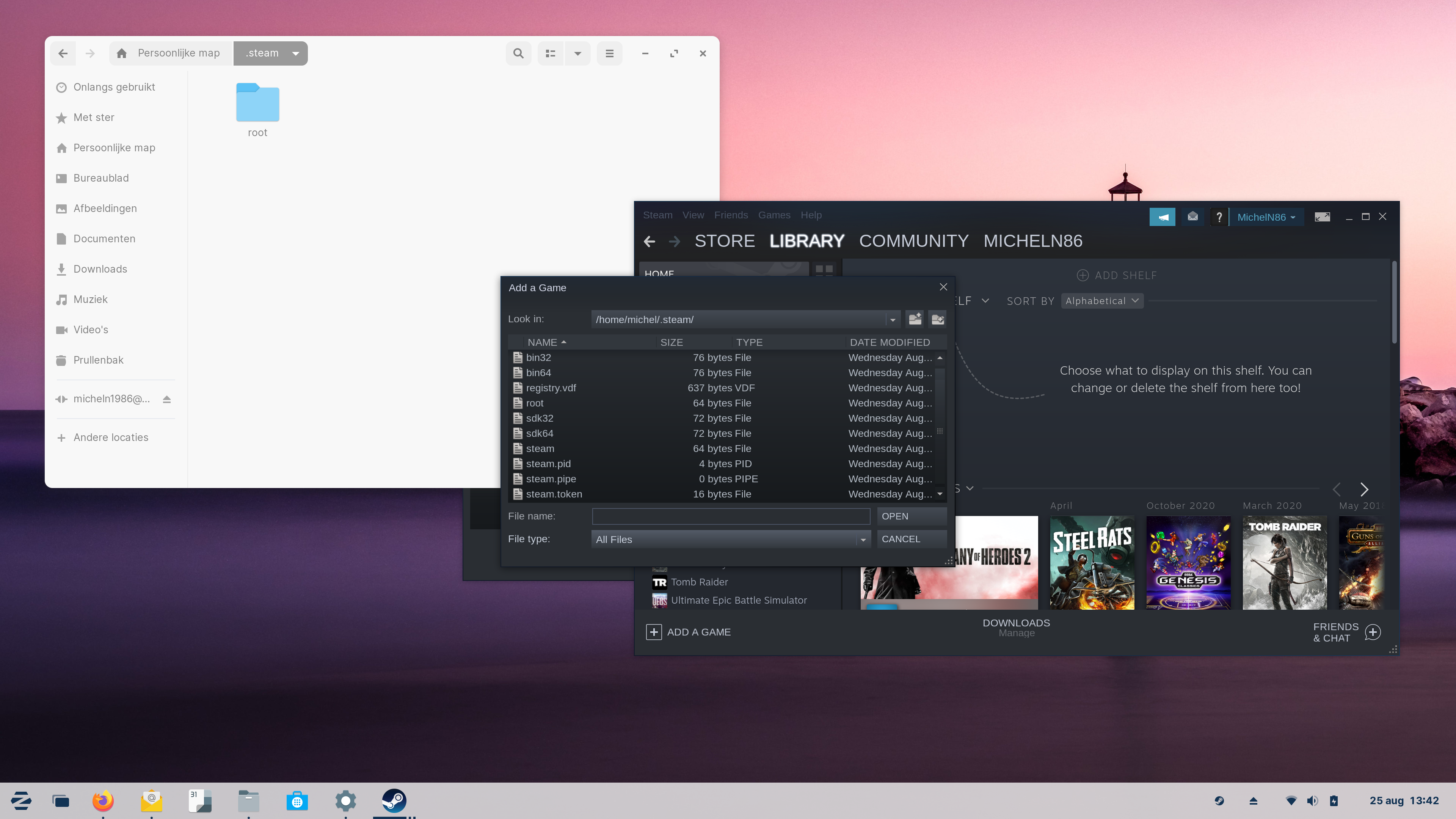 Also why does steam not allow ntfs partition ? i can't select my windows drives where the games are installed on.

Why does it look different then when i look in the steam app it self ?

I've never used Steam myself.
I think you need a someone like @Storm to help you with that.

Alright thanks for your time, hope @Storm can help with this.

restart steam.
Then the rest of the guide you link should be follow-able.

Which .exe? The guide only explains The Steam version of Mass Effect. I guess you got the GOG version?

@Storm, steam does not detect the installed proton. I get the feeling that steam has a root folder that cannot be accessed. 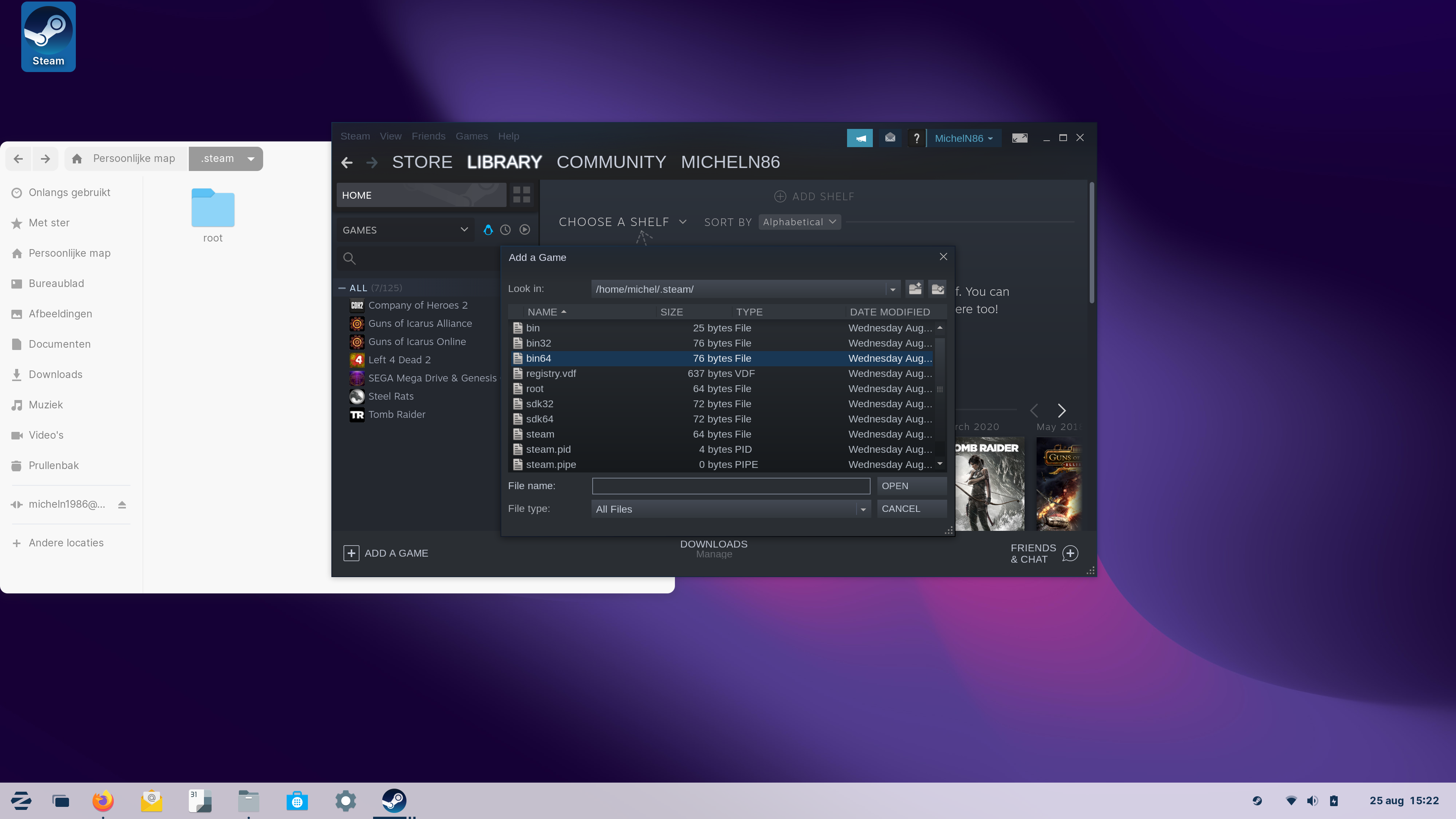 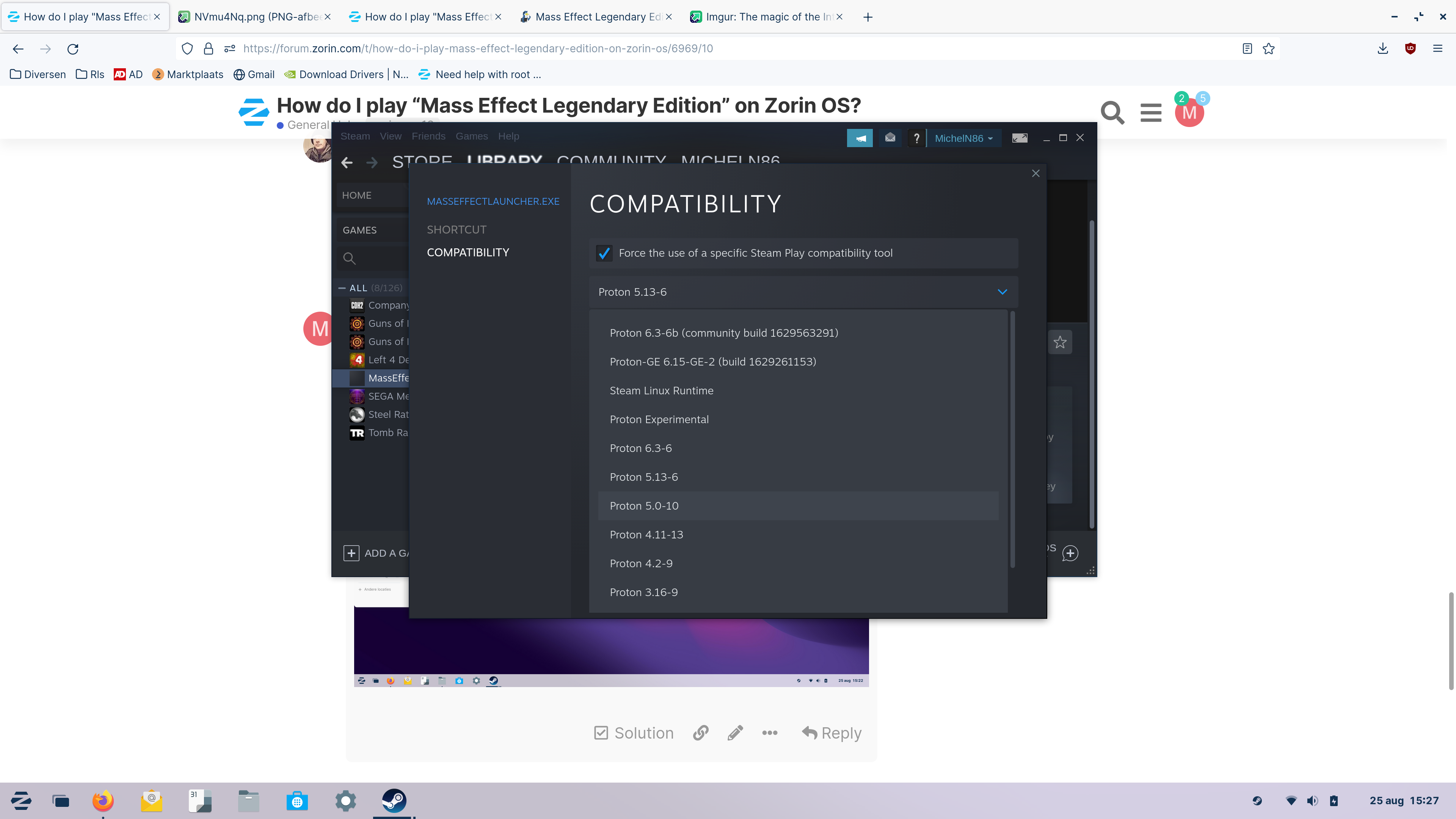 I get the feeling that steam has a root folder that cannot be accessed.

That is directing to your home folder.
Open your file manager in home (Where documents, pictures etc. are) and hit ctrl+h if you do not see the folders with . in front of them.
Once you do see them (like .config, .cache, .fonts etc) you sill see one .steam
That is the folder being directed to.

Actually if you purchased a Zorin 16 Pro, you could directly ask Zorin group for help. Just send a message as a reply to the mail you received when you made a purchase.

On the second picture it shows the install custom Proton. Proton-GE-xxxx

The first picture you see the /home/michel/steam/ and all the files that are in the steam folder.

When i press ctrl + h i only see the folder from proton (the downloaded one). Why dont i see the files from what steam shows. When i look into steam and look in the /home/michel/.steam/ it show their own files and not the folder i installed.

Stream is probably looking for an executable or the Linux equivalent... at the bottom change the dropdown from application to all files and folders, or just all.

The stream directory everyone is refering to starts with a period, making it a hidden system folder in Linux. In ms it was $. By creating a "steam" folder you only confuse yourself. Your stream software doesn't even know it exists.

A quick side question for @Storm or other people who could help: I try to play Windows games with Proton (Experimental by default) but when I click the "Play" button, it automatically Cancel, then Stop, then it gets green again "Play". So can't launch the games. I tried Glorious Eggrolls, but doesn't work either. Weird thing is that Proton versions 5.10 and earlier do work, the games launch. I'm at lost because I saw so many posts about that issue but can't make it work... Anyone had the same issue on Zorin OS and has a solution?

Yes same here, no matter what i try to do it always says "launch failed". Installing the older protondb manually does not get picked up by steam either.

i was wondering ...
How did you install Steam? .deb/flat/snap? There can be a problem if you installed Steam as flat/snap as they run in sandbox.

There can be a problem if you installed Steam as flat/snap as they run in sandbox.

Just like what I experienced with FlatPak OnlyOffice.
It is in the sandbox and unable to connect a network printer nor a network drive. It is puzzling why they bother to create this mode of installation. Office suite without printer is completely useless