How fast does your Computer Boot up with Zorin?

I was doing some tests and I decided to record the actual time it takes my computer to fully boot up.
I fully turned my computer off and measured it from the second I pressed the power key to when I could interact with my computer (the login screen was fully loaded up). Oh and I only measured it once.
I would like to hear your results as well.
On Zorin16 it took 27.70 seconds to boot up. It's much higher than I anticipated. It felt much less.
As a side note, Windows 10 (alone, with fast boot enabled) took between 5 to 7 seconds. Damn. I'm curious to know how long your systems take to boot up.

I've never measured the time, but it is usually long enough for me to go into the kitchen and draw a double espresso. When I was running Mint XFCE, booting time was much shorter.

I have a bios password, grub menu and a long login password, so it depends on how long i take to input all that information...i normally don't have but 3 seconds between input screens. I'm also running on an Asus a17 tuf gaming laptop, which will make quite a significant difference. Ryzen 7 octa-core with 32gb of ram doesn't leave time between screens. It's faster than windows though. Which takes 5 seconds between screens.

I never thought I would say this on this forum but... I have never measured mine. And I do not intend to.
That said, I do notice that on Zorin OS 16, boot up time seems to take a pretty long time. Once booted, everything is pretty quick and I am not one of those that feels the need for a very fast boot. But I know that others are and I anticipate that as Zorin 16 is used more and more by a wider audience, it is going to be asked about with greater frequency on the forum.

I have a stationary and a laptop. Even if my Desktop is waaaay more powerful than my laptop, then my laptop boot up in 5 seconds and my Desktop 15 seconds.

I tested on my main desktop and HP Elitebook.
It took much longer than your figure.

While I do not mind slow booting, I just wonder what could slow down the booting process.

Can check boot logs for errors or quits:

And use this to find who to blame (For many, self included, udisks2.service is usually top dog):

It took much longer than your figure.

I guess it is because you have Zorin installed on HDD?

While I do not mind slow booting, I just wonder what could slow down the booting process.

Well, Windows uses a lot of shenanigans to boot up very quickly. It is a lot of software side optimizations that are designed for Windows OS and makes the computer less compatible with other OSs as a result (i.e. Fastboot, Secureboot, etc. ). The Windows bootloader was designed with the intent to boot Windows and its not really compatible/optimized with/for anything else. But Grub as an example is the polar opposite as it designed for compatibility and flexibility.
As a funny side note, if you manually add Zorin to the Windows Bootloader and try to boot from it, the bootloader, first fully loads Win10 up and then asks you if you want to boot up Zorin or any other OS

But as @Aravisian mentioned, the boot speed is not as important as the speed of the the actual OS. While Windows boots up much faster than Zorin, the actual performance of the OS is significantly inferior to Zorin.

I think overall, Zorin has many many advantages over Win10 but at the end of the day, I think it is good to remain objective and know the pros and cons of a software/tool. While Win 10 boots up quickly, it doesn't have much else going for it in the way of advantages over Zorin.

I prefer the Zorin OS 15 Plymouth theme (plymouth-theme-zorin-logo - 2.2)to the Zorin OS 16 Plymouth theme (plymouth-theme-zorin-logo - 3.0.2). I keep meaning to change it. So, I just did. With an extra reboot just for good measure. While not a stopwatch measure, I kept a per second count going in my head as I waited from the Init of the Plymouth theme (I do not count the MB splash) to the Login Screen. I would guess it to range between 38 and 48 seconds on average. It seems longer when you are sitting watching it.

t seems longer when you are sitting watching it.

Yeah definitely. Before measuring it for good, I even thought it was shorter than the Windows 10 boot time.

For many, self included, udisks2.service is usually top dog

as you said "udisk2.service is usually top dog " ,
but in my case plymouth-quit-wait.service is at the top ,
also i taking 1min 30sec approx to boot
zorin 16 beta is installed on HDD (no SSD here)
pls, see if i could do anything with this to reduce boot time 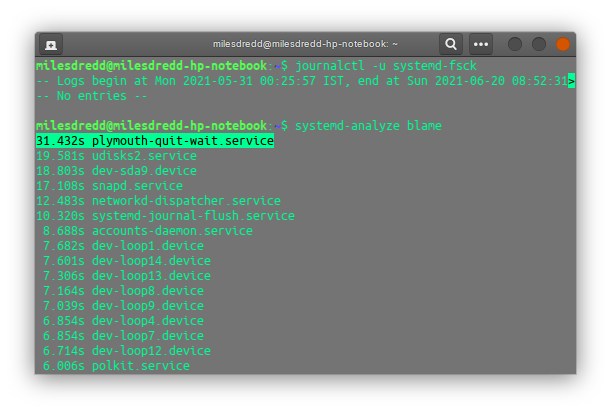 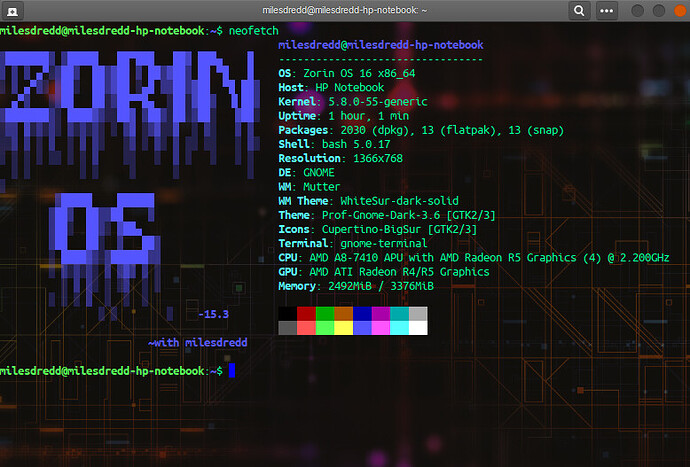 but in my case plymouth-quit-wait.service is at the top ,
also i taking 1min 30sec approx to boot

The process plymouth is part of what manages the Boot Process and it runs in parallel with the other processes. For plymouth-quit-wait.service, as its name implies, it is not actively doing anything. It is 'waiting' during the running of other initializations. Yours appears to take so much time because it is waiting for that 31.4 seconds on other initializations.

Your next big hitters are udisks2, devsda9 and snapd. Are you dual booting Windows?
If you are not actively using any Snap Packages, you can remove Snapd to stop that process from being a boot hog.

Your last big hitter in slowing your boot is netword-dispatcher.service, which if you are not a server admin, you do not really need that module. You can disable/remove it:

Your next big hitters are udisks2, devsda9 and snapd. Are you dual booting Windows?

In this case, you cannot do anything about the time being taken by dev-sda9, but hopefully the other tips above can still help you.

EDIT; Oh one more thing- a lighter Desktop Environment like XFCE4 can reduce boot up time.

if you are not a server admin, you do not really need that module. You can disable/remove it:

I disabled mine on both 15.3 and on Z16 beta without any trouble.

If you are not actively using any Snap Packages, you can remove Snapd to stop that process from being a boot hog.

This will print out all Snap Packages that you have installed. You can remove any you are not using with

If you are fine with replacing any snap packages that you are using with Non-Snap packages (from a .deb package, for example) - then you can remove all of snap and snapd.

i can remove it , without affecting ikscape,vlc or any?

No. If you remove snapd, then inkscape (snap), VLC (snap) will no longer work.
However... You can install Inkscape from the main repository

and vlc, notepad++, WINE and xournalpp from repo.

Don't worry about Gnome, Cores and gtk-common-themes. Those are packed with Snap, but also installed normally on your system. I removed Snapd on mine and all of that remains.