How fast does your Computer Boot up with Zorin?

Zorin 15.3 Lite boots up very fast even on the older machines as you described.

But when I clean installed Zorin 16 beta on them, the booting speed became crawling

As I have been using computer since DOS 5.0

I am quite OK with that - but not for my daughter-in-law who only knows computers after Windows XP. I hope this slow booting time will be solved in the projected release version of Zorin 16.

but I'm really talking about 10~20 minutes until it becomes usable and responsive,

I usually use a booting time for Zorin 16 (1 - 2 minutes for me) to make my morning double espresso. 10~20 minutes would let me prepare American breakfast

instead of Continental one

Wow, that is too long, in a world of SSDs my old Acer Aspire 3 take 20 seconds to boot into Zorin Os 16 Core with a hard drive.

Wow, that is too long, in a world of SSDs my old Acer Aspire 3 take 20 seconds to boot into Zorin Os 16 Core with a hard drive.

Actually the booting time for my 9 - 10 years old Acer Aspire is much faster.

My main desktop is a so-called server grade and it has to go through much testing before it boots up. Coming from an old school, I feel more comfortable to take time to startup this over-specked monster

The last time I was using Zorin OS, my computer boot into it in 10-seconds. This is actually common for fast computers using SSD drives. But I feel it important to mention that, if using the greatest NVME M.2 drives, like the crazy ones that supposedly do 6000MBPS read, it would probably reduce it to 5-seconds who knows lol.

But its like its already been said in this thread, its not about the speed that it takes to get you there, its about how the computer performs once your in the system that matters. Better living when your computer isn't as slow as a slug and a snail on a side walk.

Better living when your computer isn't as slow as a slug and a snail on a side walk.

If fact, I feel the speed limiting factor exists between monitor and chair. For example, I cannot type as fast as I can think.

It depends. When you using example menu start with 5 second. Then waiting for loading all stuff it takes some 60 second or more but it is very funny watching how it loading like a hackintosh or apple operative system. I remember Mint was faster but it could change long time don't tried him.

22 posts were split to a new topic: Old tech vs. New tech

On my Zorin 15.3 my boot load time usually take 30 seconds or not less than 25 seconds. I don't know for the 16 version coz I'm waiting for the direct upgrade.

WOW, your post was surprisingly quite scientific with your attention to detail. Quite informative, good job!

Wold you mind to tell us which software you used to get those figures?
I was so impressed.

I am not count how fast boot but Zorin is very fast to response anything what you want open or anything what can save time when you lost when Zorin started.

i installed zorin on ssd and this is my systemd-blame. it'so fast that i'm not aware about boot time beside the choosing screen because of dual boot with windows 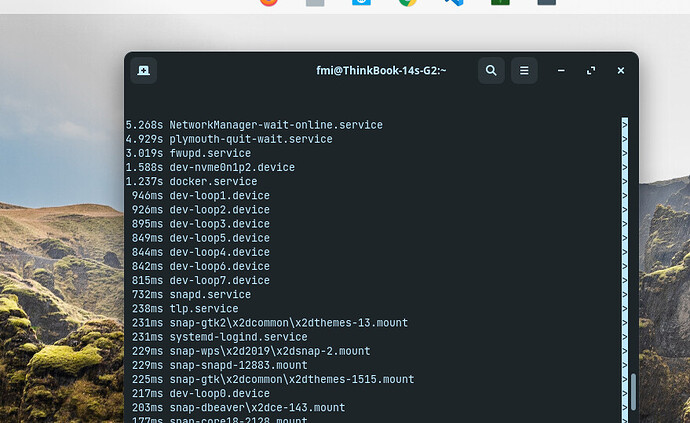 I forgot about this thread. Now that I am running Zorin OS 16 on this old dual core workstation, its time to provide my systemd-analyze.