How to fix an error occuring during installment in dual boot

My old PC is too old for MX Linux. So, I try to replace it with Zorin OS Lite for the dual boot setup. In the MX Linux partition, I install the root "/" of Zorin. Near the end of the installment, I got an error message "Error restoring installed applications" and "installer crashed" (see the screenshots). After restarting the PC, the boot screen looks fine. After selecting Zorin, the screen somewhat looks like MX Linux which the command bar is vertical on the lift side of the screen. But it isn't MX Linux, nor Zorin. On the top left corner, there are two icons: FAQ and Manual. When I click any of them, I get an error message (see the attachment screenshots).

I installed it twice with the same errors. When I reinstalled it, I noticed that "/" didn't show up in the Zorin partition.

How to solve the problem?

Screenshots are in the following folder:

@vw98008 Hi and welcome to the forum.
Some people do not lile to visit 3rd party websites to view screenshots. It is best if you can attach them to your post using the "Upload" tab in the Reply toolbar, as I have just done.

Have you checked out tutorials on here re partitions for dual boot: e.g. Partitioning during installation

I know that. And this website doesn't allow me to upload those image files due to their sizes. It is way more trouble for me to get them on a cloud storage.

In terms of partitioning, I saw one Zorin installation tutorial on youtube (https://www.youtube.com/watch?v=fmz-51N2miQ). That tutorial shows only one partition is needed which is consist to other Linux distro installation. I will try your tutorial and see how it goes.

If you use the "install on whole drive" it should work fine. If you choose "something else" option, you must be sure to Set your Mount Point to /.
The mount point drop down menu appears in the popover window from clicking "Format Drive." You will see ext4 journaling files system and mount point.
That mount point is easy to miss. It gets people, sometimes.

That is what I did.

I would just do a reinstallation of the OS, then.

I already did that

It's dual boot- What is the other OS?
What is the make and model of the machine?
Does it use MBR (you said it is old, but old is relative) or EFI? 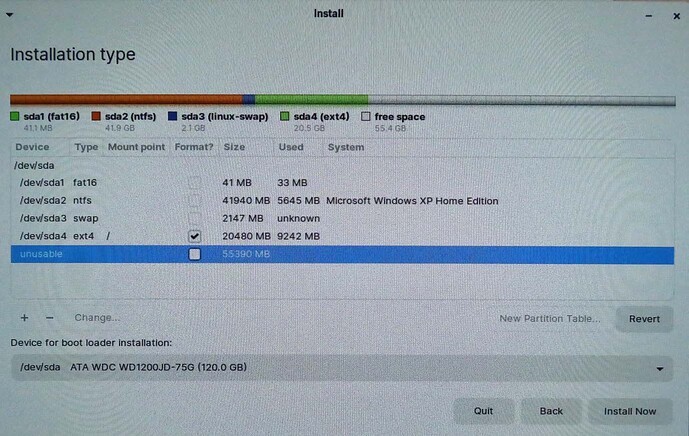 IMG_08481374×870 160 KB
@ zabadabadoo Following the partition during installation guide, I try to make a room for swap and home by reducing the root size to 2G. The result is that the rest space becomes "unusable" (see the attached screenshot). And the panel provides no option to change it. The "+", "-" and "Change" are disabled for the part. I have tried to see whether I could do anything for the dish space on Windows or not. And it doesn't seem I could anything either.
vw98008 23 April 2021 01:30 #10

Win XP did not have Fast boot. You may have secure boot in your BIOS settings- might check that to be sure. But If Win XP, Dell Dimension- I suspect no secure boot and MBR, not EFI.

2 gigs is way too small, You need at least ten gigs minimum and even that would fill up faster than Donald Trumps wallet at an RNC convention.

Have you tried using Antix or Puppy Linux?

How do others have a dual boot with Zorin if the number of bootable partitions is limited to four as Zorin needs at least 3 partitions if my understanding is correct?

I misspoke the size. It is 20G instead. I have tried quite a few distros for the old PC including Antix. Some of them are too hard to install/setup.

Zorin OS only needs One Partition. It is possible to install it using different partitions and some prefer to, in order to preserve Home in case of reinstall later. You can use two partitions, with HOME installed on one and Root installed on the other.
I always use one partition and use back ups to preserve my data.
On your image, I see three partitions- one is unknown and labeled Swap (Swap should be on same partition), one is formatted to FAT 16.
Is this a 32bit OS?

Glad you clarified root 20G as per your screenshot, not 2GB, which would be too small.

On my XP Z15.3Core dual-boot, I have XP in one partition, then a second extended partition (sda2) containing linux-swap (sda5), root (sda6), and home (sda7).

Thanks for your info.

In my previous dual boot installations, there were four partitions in total. Windows uses two of them and Linux uses another two and one for swap. Now, it seems that Zorin needs an additional partition for the home. For a total of four partitions, that runs into a wall.

If my understanding is correct, your Zorin installation only uses one partition. If so, how did you install it?

how did you install it?

Actually, when I came to install Zorin 12 Core way back, I followed this thread by Wolfman, which is still on the old forum archive here: How to use Gparted to dual boot with Windows/ Linux - Old Zorin Forum archive

Note. I have hunted down an old archive thread and done an edit to my post above.

Depending on the amount of ram you're system has, and that a portion of the root partition will be used if you don't specify one, skip swap partition. Zorin root partition and windows will be two bootable partitions. You can have another, /home partition, not bootable... which reduces the need for a large root (configuration files, downloads, Customizations, documents) all stored here. You are not limited to 4 partitions. Your limit is 4 bootable. You confuse home for a bootable... it's not