If I install Zorin OS as a virtual machine on Windows will I limit its abilities?

I installed ZorinOS lite on a very old laptop and brought it back to life.

Now I want to install it on my main laptop but I need windows apps for work.

So I am thinking of installing Zorin as the main OS and getting a pro license and installing windows as a virtual machine for my apps.

However, I would like to try things out at first..

So, I am thinking of doing it the other way around. Installing Zorin OS as a VM on my current windows.

Will that limit the Zorin system? Will I still get to experience its speed if it's working "through" the Windows?

Another way would be to dual-boot Windows and ZorinOS.

True but I can already see the benefit of having both systems running at the same time.

My work is mostly divided into online and offline.

I would do all of my online work through Zorin and offline such as graphical softvare use through Windows. I do these things quite interchangeable so dual-booting would be difficult

I'd love the answer to this, as well. My aim is different... But I would like to be able to run more than one Linux Distro at the same time instead of booting into them for Testing Purposes.

Installing Zorin OS as a VM on my current windows.

While you can do this "other way around" you will miss out one big advantage = security. It is way more secure to run Windows as VM than running it on a bare-metal.

It also makes restoring Windows a breeze since backing up VM is as simple as copying a single folder.

Will that limit the Zorin system? Will I still get to experience its speed if it's working "through" the Windows?

Since I've never tried this "other way around" installation, I cannot tell you in an absolute term, but one thing to keep in mind is that one should not give more than 50% of the computer power (number of CPU cores, amount of RAM, and Video card memory) to VM for a stability reason. This is BTW, a major drawback for serious gamers, who want to use 100% of the computer resources.

In fact, since the VM also virtualises drivers, it will run faster compared with the same spec bare-metal. I can install Windows as VM much faster than on bare-metal since I do not have to bother with all those drivers.

I am testing this as we speak. I am installing Zorin OS lite on windows as a VM using a VirtualBox.

I am noticing that I can't increase the window size from 800x600 it seems stuck on that dimension.

I didn't allocate more than 50% of the resources. This is just a test run anyway

Security-wise, Zorin OS is more secure than Windows? I didn't know that. But yet again I am no Linux expert

Linux is way more secure than Windows by design. I would not reiterate here since much has been discussed elsewhere on the net.

I am noticing that I can't increase the window size from 800x600 it seems stuck on that dimension.

Since I've never used VirtualBox on Windows, I am not 100% for sure, but you might want to check this solution. How to change the size of your virtual box window

Sometimes when you first power on your Ubuntu Virtual machine (or any similar VM), the window size and resolution are quite small. Here is a short tip on

Unfortunately, that is the scale factor only. Doesn't really increase the resoultion. I see now that there are some "guest integrations" I will need. I guess I will be googling this one out.

For the now the VM runs great on a tiny window

I see now that there are some "guest integrations" I will need.

Yes, that is what you need!
I thought you have already installed this function.
Well, I should never assume anything when I cannot actually see the machine in front of me

then mouont the guest iso and run the Linux script to get better resolution.

I don't really know if I installed it..

I installed the general extensions. I don't know does that includes it.

My vm has mouse and keyboard support but I can't scale the screen.
Also since there was no option for zorin specifically, I chose Ubuntu 32bit as a vm type. I don't know if that has something to do with it.

Where do I input this? I know nothing about Linux sorry

In Zorin that yuo are running in VM. Open its terminal.
And type;

Then go to the VMs tab ---> Devices and mount guest iso

Also since there was no option for zorin specifically, I chose Ubuntu 32bit as a vm type. I don't know if that has something to do with it.

Zorin OS: Thanks for downloading

A powerful operating system designed to make your computer faster, more secure and easier to use.

and select the iso file as installer file during the installation.

It looks like @Storm has more experience than myself. After you install the VM Zorin, you can follow his advice to get a higher resolution in VM.

In Zorin that yuo are running in VM.

OP says that he installed 32bit Ubuntu in VM.

Also since there was no option for zorin specifically, I chose Ubuntu 32bit as a vm type. I don't know if that has something to do with it.

I think he used a build in so-called "Easy install" function of Virtual Box. I gave an instruction for how to install Zorin from iso file. I hope he can follow my instruction.

Glad you pitched in, Storm.
My memory about VirtualBox is bit fading. The last time I used it was a couple of years ago

I use it to test my themes in different environments.

EDIT: I'm off for some serious gaming. I'll check back in a hour or so.

Here's a picture of me running lite with my core Zorin. 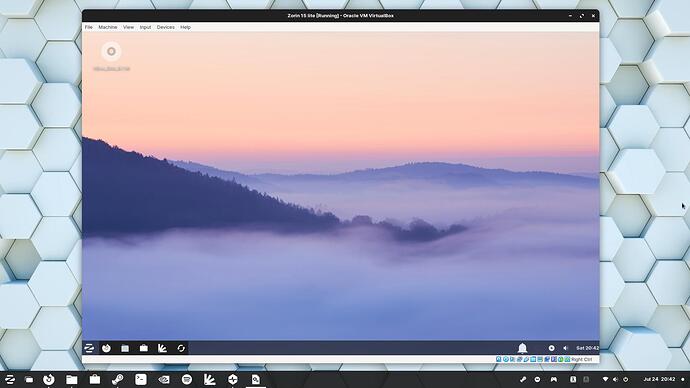