I have a problem installing a Deb package Quick-n-easy Web Builder 64 bit.Latest version.

A recent crash required a complete rebuild, one pleasant surprise was that the q&e Deb64 installed and worked well up until I was updating the site all went well up until the background went black and would not change.

I assumed this was a q&e issue and removed the software with the intention of replacing. This is where the install issue came to the forefront once more. This had been problematic on previous attempts resulting in installing the older version of the software. While the application appears to install it does not show up with an activation key. I have tried the synaptic approach without success. From what I have been able to establish "Additional MIME types required" My question is there a software I can install that will make the Deb installation reasonably straightforward ?

Yes there is, Gdebi Package Manager.

After installation, reboot the comoputer, login again and then find the .deb file you downloaded, right-click it and select 'Install with ... Gdebi'. It will whir for a few seconds as it checks to see that all dependencies needed for it to run are present, if not it will report what packages are needed. However there are some libraries that might not be available, either because they have been deprecated following updates to Ubuntu core libraries, or not available because a newer version of Ubuntu is needed.

When you want to re-install 3rd party .deb's :

Always use the PURGE-command first, and you need to follow it up by a sudo apt autoclean and a sudo apt autoremove (in that order) , before you re-install the software again.

A manager can help but most of the times they do not remove configuration-files (the memo of the software, such as activation, or license-agreements).

Good day and thank you for the response, I followed the instructions removing what the OS claimed to be existing app.
During installation the GDeb stated the Q&E app. was already in place. Same result no Q&E on the desktop. Can I purge all trace of Q&E and try to reinstall. 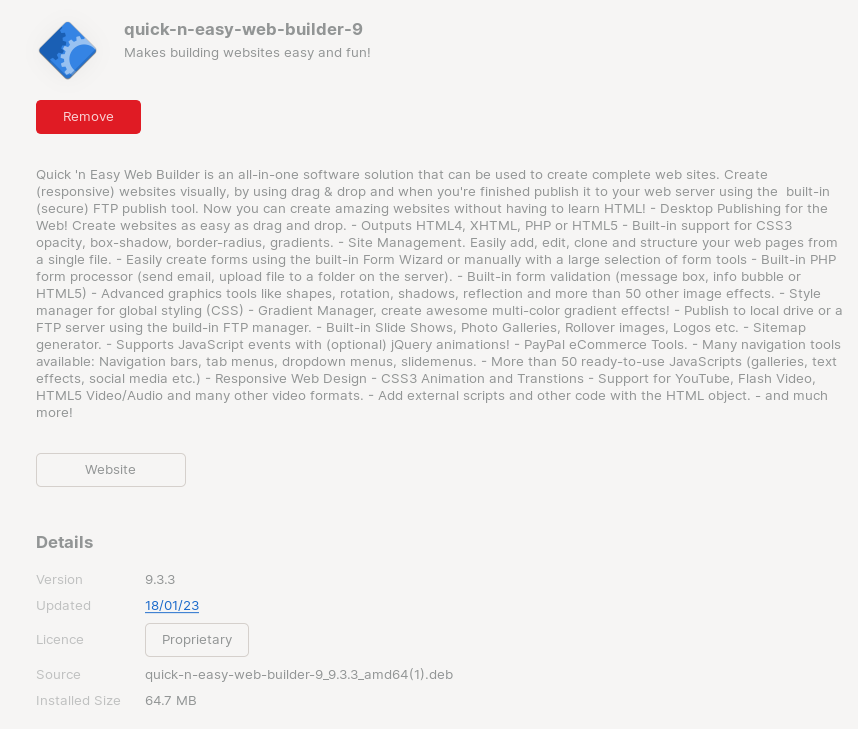 I'm not sure what you'd use for {package name} (use it sans the curly braces), you'll have to use:
sudo apt list --installed
... go through that list to find all references to quick-n-easy-web-builder, then purge them.

So it would look something like this:
sudo apt purge quick-n-easy-web-builder-9

Good day and thank you for the input, both your suggested commands appear to work, I shut down for a short time after and then attempted a re-installation. See the attached it still seems that the application still resides in the OS.
I ran the same process once more this time I used GDeb to reinstall same result. The OS reports that the app. is installed however it is hidden/

Good day folks
To bring you up to speed with the issue, I had reached the point after many hours punching the keyboard that it was extremely difficult to remove all traces of a Deb package from Zorin OS. Finally I admitted defeat formated the drive reloaded Zorin and as a first measure loaded the Quick & Easy program. Well it loaded straight in up and running I just need all the other apps and adjustments. Again you folks that pitched in thank you.