I have a wireless mouse and keyboard plugged in (both from Logi).
But I see only 1 entry in the power settings.
The inconveniënt thing about this is when I get a low power notification, I don't know if it's for my mouse or keyboard.

In this gif I power on and off my keyboard to illustrate that the device in the power settings menu changes, but doesn't tell me if it's a mouse or keyboard

I thought that Power shows only the laptop battery, not even other wireless devices

This probably isn't going to help at all because I use Cinnamon DE and not Gnome but I show my Bluetooth Logi keyboard and not my WiFi USB mouse .... 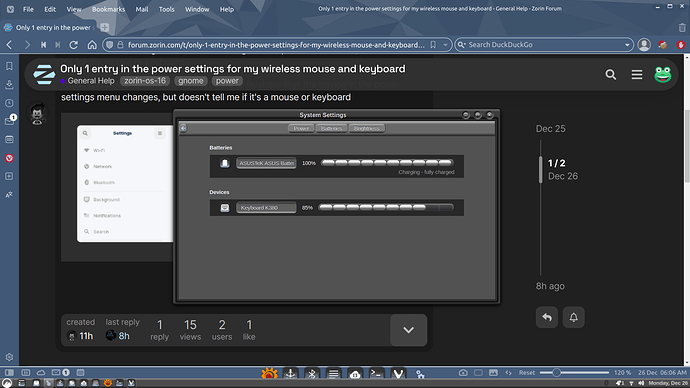 Haha, very happy for you!
But indeed, doesn't help me

Was it difficult to install anther DE on Zorin?

No Both Cinnamon and Xfce are easy to install .... if you use Zorin 16 Lite it uses Xfce already .... do a search on the Q & A topic on the board for Installing Cinnamon DE and Xfce as I believe there are instructions there .... I know Aravisian did one on Cinnamon as that is where I got my instructions .....

Well I am now here on Zorin 16 Pro running Cinnamon Desktop .... Thanks to Aravisian for his knowledge and patience and the following terminal commands ..... sudo apt remove --purge mintsources sudo apt install cinnamon cinnamon-core I have spent the morning customizing the desktop to my liking and although partly finished I have a ways to go .... I have however run into one small snag ...... how to enlarge the mouse pointer ...... I tried all the usual settings with no luck so I tried th…