I don’t understand why there are this many options for sound but none of them seem to be helping.

@Shadowblitz16.
Are you on Zorin Core or Lite?
What sound chipset do you have?

Sorry, a lot of questions, but answers may help us help you, although I have personally found sound issues sometimes difficult to address logically on Zorin.

I am dual booting with windows 10 and my sound works fine there.
I can try booting from USB but If I remember correctly sound didn’t work there either.

Well that is what I have got on my machine and it works, (well most of the time).

If you run Alsamixer and look at Sound Card listing (hit F6), what do you see?

How to fix audio not working Tutorials & Guides 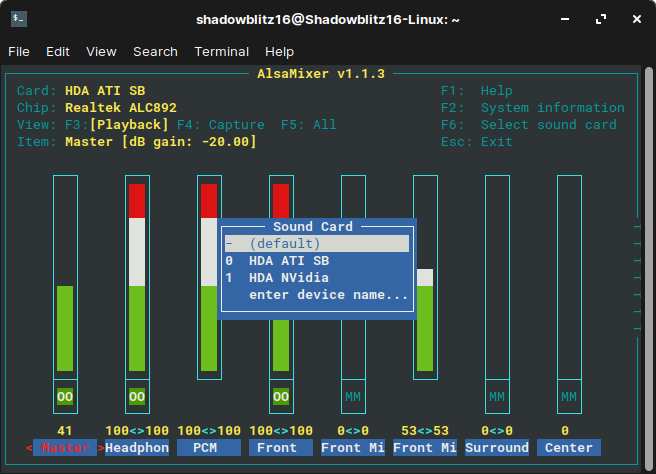 I already unmuted and turned up everything in pulse audio manager

What happens (if anything) if you set Sound Card to “1 HDA NVidia” ?

Like I said above, there is no logic to some sound problems. Sometimes just fiddling about results in it working, then you forget what you did, so not repeatable next time.

I wish you luck. IMO sound problems seem to need a lot of that.

I get this when I select it 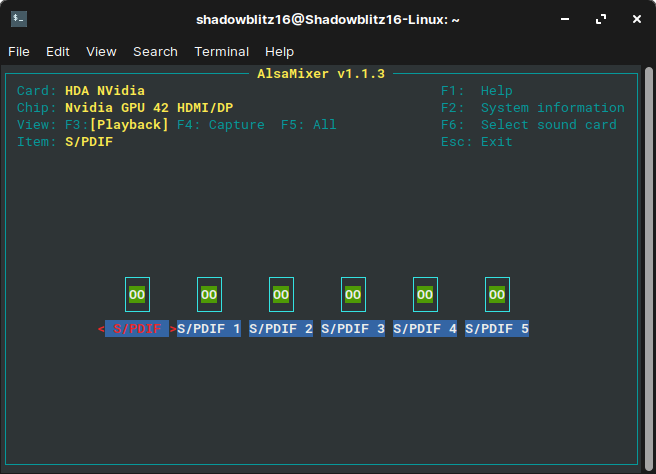 @zabadabadoo so I fixed it.
Here was the problem…
I am using my front jack due to my back jack being broke.
I just realized this is for head phones.
Switching to the head phones output in sound settings, it worked! of course then there was the problem of my right sound not working.
rotating the input jack in I continued to test it with right and left and found if I rotated the jack upside down it would connect in a way so both left and right sound worked.

So this was both a issue of my computer being old and broken and me not realizing the front jack was the headphone slot >.>

@Shadowblitz16 . Yay! So you are now hearing the music, great stuff.

I suggest you put a few drops of alcohol (isopropyl alcohol) on your jack plug and work it in and out and rotate in the socket to give the contacts a bit of a clean.

I can try.
I think its was more of a issue of me jamming a larger plug in then it takes.
Also my chair tends to rip the plugs out often so it might just be that the socket it lose.

No sound to speakers after kernel update Hardware Support

A couple suggestions you probably already know… You could try a force reload: sudo alsa force-reload Followed by a reboot and check sound. Another is to backup or remove ~/.config/pulse and reboot.


I did:
sudo alsa force-reload

Then back to Settings>Sound>Speaker Test - no sound.
Whilst there, I waggled the volume slider a few times and toggled between headphone and speaker a few times. Then heard a faint click.
Speaker Test then reported “front left”, “front right” Yay! about time too.

This time I cannot blame a kernel update as the suspected cause. I did install the new kernel update offered by Software Updater during all that but I had no sound from before that.

So what is it about Zorin and Sound? Why is it so unpredictable?
My magic wand is getting worn out.

Hello
I think i had a similar problem. I found out that pulse-audio sound system was not installed (why ever?). I installed it via apt and everthing worked fine.

@herbert Welcome to the Forum. I am glad just installing pulse audio fixed your problem. Lets hope it stays that way.
For me it is erratic. I never know if sound is going to work after any boot. Seems totally random, as if sound is edge triggered but misses the trigger sometimes during a boot sequence and I hear the loud pop though my internal speakers. That is the usual depressing tell-tale that sound will be dead when I log in. I then have to go crazy with volume slider and toggling speaker/line switch in settings>sound, with or without additional reboot to get sound back. Really frustrating, as it is random.