I am testing Zorin at this moment on Virtual Box. So far so good, everything looks fine. However, these were issues I encountered. I do not think it is an issue of Zorin OS but I'll ask anyway:

Just a thought, If your just wanting to try ZorinOS,
Try running it from a usb live, this way you can "TRY" ZorinOS, when you install the live usb drive.
No install needed,
Leaves your pc untouched.
Install when your happy

As you know your performance in VM environment depends on allocation of resources/accessibility.
This may help also

How to create a virtual machine and install Zorin OS inside it.

With Live usb,
you get the full benefit of your pc's resources.
& if your Break ZorinOS under " TRY " ,
All you'll need to do is just restart the pc, & start via live usb again

A step-by-step guide to help you install Zorin OS alongside your current operating system or instead of it.

Select the " TRY ZorinOS",
When ready you could then choose to install.
Dual boot or Clean.

Yeah so I was thinking that maybe it is just Virtual Box where I have having difficulty using video, audio or access a USB Stick. I tested Linux Mint on Virtual Box and at the very least, I was able to activate webcam and access microphone. I tried again with Zorin but it was not working. What seems to be the issue?

Thank you for that.
Yes try ZorinOS via live usb, just change the BIOS priority to boot from the usb port.
Then when your ready you can install alongside windows ( dual boot) or a clean install.
You could make many partitions & have many OS installed, you only need around 50gb per OS.
Watch the top video here,

I find Virt Machine Manager better than Virtual Box, but I understand it is a bit more complicated to use in Windows. Frankly you would be better off running GNU/Linux as your main OS and have Windows as a VM in Virt Manager, which is what I have with Windows 8.1. 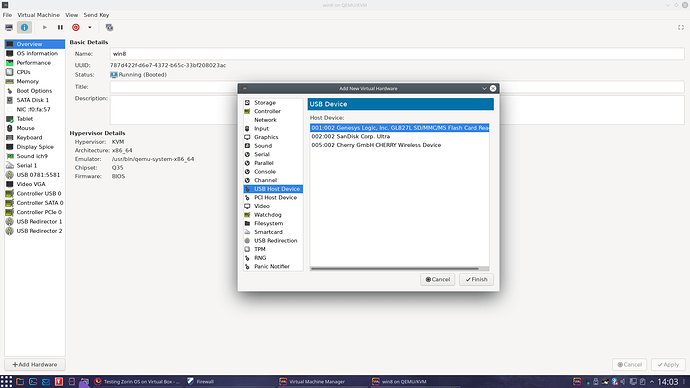