I’m trying to convert a load of old .wma files (Windows Media Audio) which are DRM protected (Digital Rights Management) and therefore unplayable to a working format such as .mp3 or .wav using FFmpeg.

(the wma files are recordings of songs that I wrote and therefore I own the copyright of the material.)

For the experiment I’ve given a song the name: songx

but the terminal message said: -

songx.wma: No such file or directory

Can anyone offer advice?

You can install VLC Media Player in the Software application, then:

How to Convert a WMA File to MP3

Windows Media Audio (WMA) files use a proprietary format developed by Microsoft and used by media players built into Windows, like the Windows Media Player. Many other, better, players don’t support WMA files, but they’re easy enough to convert to...

You might have to get creative here. It's known that if you burn the music files to CD, then rip the files, it'll eliminate the DRM.

But what if you don't have a CD burner, or don't want to burn a bunch of CDs?

Then set up a 'virtual CD' (a file posing as a CD drive), burn to it, then rip from it.

Create a block device by creating a partition:
dd if=/dev/zero of=file.img count=102400
... or whatever size you want for 'count'... then mount it as a loopback device:
losetup /dev/loopX file.img
... where 'X' is a number.

Format the ramdrive as FAT32. It'll show up as /dev/ram1. Then burn to that as though it were a CD, then rip from it.

I think you aren't in the right directory.
try to do a ls and see if you can find a songx.wma
If not, to a cd /path/to/the/files and repeat the quoted command.

I tried to use VLC to convert the files but it refused to recognize the DRM files.

I also tried to use Brasero to burn the files to CD but it refused to process the DRM protected files.

I imagine if I were to create a ‘Virtual CD’ the same DRM problem would mean the files couldn’t be burnt to the virtual cd.

I believe the DRM parameters are saved in the file metadata, so one old trick we used to use to strip metadata out of photographs was to save it to a FAT-formatted drive. Back in the day, FAT didn't support metadata, so that information was lost when it was saved to a FAT drive. I'm not sure if that's still the case, though.

Would you try renaming .wma to .mp3 or any other format and then see if it's played? Maybe a copy of the song, just to avoid problems to the original one.

I tried changing .wma to .mp3 but it didn't work.

But there would be at least 1 way to do it. I searched convert DRM protected WMA files to mp3 online tool on Google and there were many results, but I don't know which way to choose, I never used audio and video files often.

Don't know what the results would be but you could play your material in your preferred player after starting a screen recorder of your choice to capture the material and then alter file format afterwards?

That's another great idea, @Tecratonic, in case you're tired of finding a way to do what you want and looks nothing else works you can do as swarfendor437 suggested, why the hell I didn't remember this

, I suggested finding a way on Google searches for convenience, would take much time to re-record all songs if they are really many, you must have a certain patience.

The DRM protected files don’t play (because they’re protected) so I can’t re-record them.

The various DRM removal tools online that I’ve tried either charge for usage or they don’t work. Some of them are only for eBooks rather than audio files.

Some time later I found 21 search results for audio converter on Software Center and I found some interesting results, and this that I opened says to allow WMA files conversion. 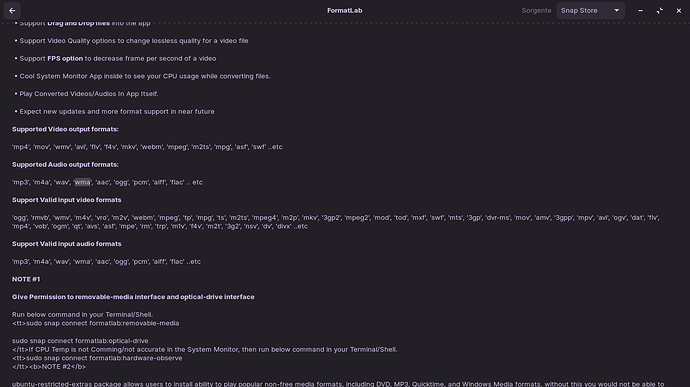