What is the real best alternative for ms-office in Linux?

I have seen topic here about alternative for ms-office in Linux, like LibreOffice , open office,etc, but I found the most alternative one is wps-office, it's very very similar to ms-office. but it has a lot of problems like problems in fonts,problem in supporting spellcheck for a lot of language, problem in opening some ms-office files, and problem in crashing when open dialog window(font window) which block the main thread until it open. so the question for who used ms-office in windows for editor , what is the most alternative for ms-office in Linux, if it is wps-office, do u face problem with it, and how do u overcome on it? or I should use ms-office with wine?

The best alternative would vary from person to person. It depends on how and what you use an office suite for. I've been using Soft Maker FreeOffice for home use on Windows and Linux , but don't have a need for the presentation software that comes with it. I use only US English and can't comment on multiple languages. I have had problems with WPS and would make sure you are installing an official build.There are snaps and flatpaks available not from the official web site.

That was also my experience. Try them all out, and after a time you will find your alternative. For me no one is really perfect, but almost.

I am at the moment fixed on FreeOffice.
But a good replace for Outlook is still missing.

What is the real best alternative for ms-office in Linux? You ask...

Well there is none. There is no "best" anything that does everything for everyone, there is only what is "best" for you. "Best" will be determined by the individual and what it is they want.

I get this question daily from people at my work. What's the best (insert whatever here). And my answer is the same as I just stated to you. You're on a fools errand seeking out the "best", it doesn't exist.

Even MS Office isn't the "best" as I am quite certain I can find you people where it doesn't do things people like or want it to do.

Nothing will be perfect, nothing will be the best and there will never be an exact replacement. And one of the reasons is because MS Office isn't perfect or the best.

The only thing you can do is either try them all, add plugins if available for the ones you are using and see which ones do the things you want. If none measure up to your wants, then install Windows on a virtual and use MS Office there. Those are the options available.

As stated above, there is no "best alternative" but depends on what you use MS-Office for and the complexity of your office software tasks. I for one have not found an alternative to graphs in Excel, so I continue to use MS-Office under Windows for some tasks.
There has been several threads discussing alternative office app's. Maybe this one will give you some idea, but no substitute to trying different office apps yourself to see if they meet your specific needs.

The big problem about office suites on Linux, is that they'll never be like Microsoft Office. My example, I'm trying to do a presentation, and office(even the online version) has a DESIGNER mode where the AI does the layout of the presentation. Google slides has this thing too, it's called EXPLORE. But I cannot find something like that for linux, and open source. Any thoughts?

I use LibreOffice for most things, but I had a project document with lots of pictures in it and LibreOffice Write kept crashing so I found that OnlyOffice-DesktopEditors worked better and didn't crash no matter how many pictures I added.

So now I use both as you cannot do many things in onlyoffice, or I don't know how to do them, its easier in LibreOffice, they're both free.

I too have tried numerous Office Suites and like posted above by nearly everyone they all fall short in some aspect of their use .... I presently am using Libre Office Suite along with Master PDF Editor 5 for PDF files .... I don't use the Impress or Draw features of the Suite so the Calc and Writer functions work just fine for me .....

By the way I have chosen to run Libre Office Suite on both my Win 7 and 10 Pro OS's to add continuity and at my age this is important ....

You can even use msoffice on a VM

When I was working from home, the most compatible for me was SoftMaker Office. Just before lockdown I purchased a five machine licence for just over £23 for the 2018 version and upgraded to the 2021 version. The TextMaker element was a lot better workflow than MS Word 2019 for me and I could get through much more than I could with Word. That said an MS PowerPoint document I had prepared for work colleagues did not show all the images in Presentations 2021 but did in LibreOffice Impress. That said, other Presentations I had to modify for students with Low vision there were no problems and I could even export to pdf and use Okular to work in Presentation mode. My first choice based on experience would be SoftMaker, but I also used LibreOffice Writer for 2 elements - 1. Compressing of images inside a document, and 2. Using the kerning tool (spacing of fonts in Words) as it uses Pts - TextMaker uses percentages, so if I had to modify work for a student who needed say font spacing of 2pts I would create "The quick brown fox jumps over the lazy dog" in LibreOffice Writer, save as .docx then open it in TextMaker 2021 and open the spacing window to find out what 2pts was in percentage terms and apply that. Also TextMaker 2021, because it was not a networked works machine at home but my own build, I had no need for Styles - I could create templates of different fonts and font sizes and start a new document with that. Also when extracting a table in Okular, the font in TextMaker would drop to basic roman (akin to Times New Roman) in 10 pts, but say I was working on a document that was Arial 18 Pt, I would at the start of the document apply that font for the whole of the document, so changing the malformed font in the extracted table, all I had to do in TextMaker was highlight all the cells then press Ctrl+ Space and the document font and size applied immediately. SoftMaker Office has a much better back end of tools and its ribbon is more logical than Microsofts which I hated with a passion in Office 2007 but can live with in TextMaker 2021. OnlyOffice would be my second choice. But I wouldn't live without LibreOffice either - why? Because I was working on a pdf sample Exam paper in Qoppa's PDF studio pro and my hard drive started failing. LibreOffice Draw can open pdfs - which enabled me to extract the Inkscape images I had prepared in the crashed pdf without having to start all over. Also Okular was able to extract all the text so I did not have to start from scratch again. Qoppa PDF studio pro does everything Adobe Acrobat does at a fifth of the price and no requirements to purchase those little add-ons like Adobe does - and a one-off payment not exorbitant rentals. If you are working with pdfs then you should install: LIOS (Linux Intelligent OCR Software), pdf Arranger, pdftk (pdftoolkit) - command line tool to repair corrupt pdfs, and ocrmypdf - a command line tool to ensure that a pdf can be made into an ocr pdf so that it can be opened up in Okular to extract the text - all of these latter elements are free and in the repositories. The other thing about TextMaker and LibreOffice as, unlike MSOffice, you can export to epub. Which reminds me I used Calibre to make epubs for students to listen to. Just another element, LibreOffice supports almost all known languages - not even MSOffice can claim that! As for WPS it is full of ads these days unless you pay rental and on the community forum a user asked for the code to be made public but it never was so it is really closed source, unlike LibreOffice.
What I don't like about LibreOffice is it has a mish-mash of Ribbon and old style interface and it can't seem to make it's mind up what it's doing. There is a lot under the hood under LibreOffice but for MSOffice migrators I would go with SoftMaker Office first, then OnlyOffice as second choice.

Which languages do you use except eng ?!
Im using persian most of the time and among all office suites softmaker office was most compatible and UI is more like ms office.
But nothing will replace ms office compeletly, i suggest try installing it on vm or crossover or wine.

The problem with MS Office is it is moving to 365 - no more version numbers and monthly rental. The interface of 365 is atrocious. SoftMaker workflow is so much better than MS Office in the same Affinity Photo/Designer/Publisher has a better workflow than Adobe's similar offerings at a fraction of the price.

The latest update of onlyoffice has improved microsoft office compatibility very much. In fact I am using that instead of WPS office now. Even the dark mode interface is better than any other office suite. 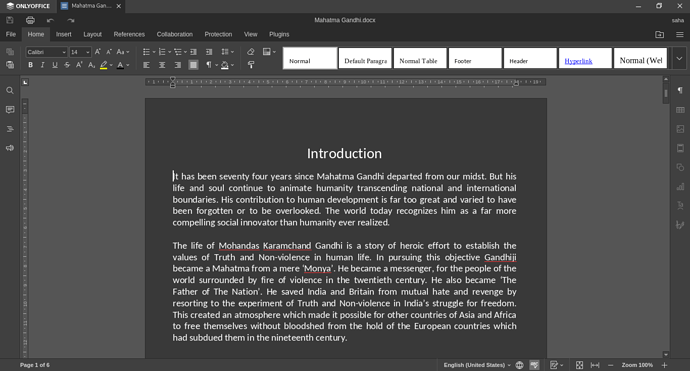 I maybe trying OnlyOffice along with Libre Writer as apparently from what I gather on the web there is now a problem with Libre printing on certain printers and mine is one .... my printer works on all apps except Libre Writer now ..... I get a message that says ..... "Document unknown set to printer unknown" ..... I'm sure they will get around to fixing it but right now I need to print about 5 docs ....

OK just installed OnlyOffice from the software store (didn't have on synaptic package manager) I don't care which version it is as I will only use it for printing and it worked just fine .... guess I'll be printing from it till Libre gets their you know what together .....

SoftMaker Office can be customised too. I've chosen the dark theme and then made the workspace (the space around the document) as close to a dark oak I could manage, with white document - for viewing printed documents on a desk it is advised you should have a dark oak desk for better contrast!

I could make it pure black if I wanted to. 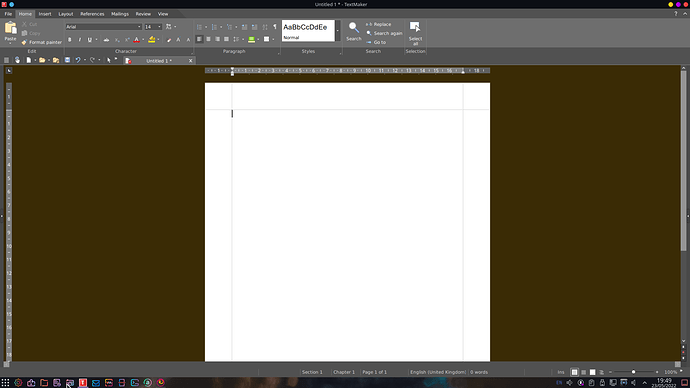