Why did you choose zorin_os?

As the title says, why did you choose zorin_os?

Zorin_os doesn't have something in particular, maybe it's because it's easy to adapt to it?
Maybe its speed?
Zorin_OS lacks things-

Any distro (Operating System) but Windows... I specifically chose Zorin because at the time, I was unfamiliar to linux. Sure, some distros comes with the bottom taskbar out of the box, but I wanted something very polished, and I chose Zorin.

I understand Zorin may not be the right be the right distro for you (you said that it doesn't have much in particular) and I'm sure there are other people who hate it as well.

On Zorin you have many software what not exist on windows.
It is for some people who liked linux distribution or want trying something new because don't wanna buying new PC with WIN11
I liked because is lower promotional things i mean "buying something".

After trying out a few distributions, run into Zorin and really liked the look and feel. It was friendly enough that I could install it in other people's computer without causing any headaches to anyone. Which is exactly what is was created for.
So even though there are things that I dislike about it, or that I like better in other distributions, its ideal for what I use it.

Have been using Mint, Ubuntu, Pop! OS and others. Particularly trying to find a lightweight one that works on an old Samsung NC10. Happy to find Zorin works. So impressed with the slick desktop and ease of use, seriously considering using it as my main Linux driver.

Kudos to the team who developed this excellent OS.

Because it was recommended as an alternative to Windows by the Firefox community. Zorin OS have more sophisticated UI than Windows, so I no longer needed Windows.

Ok. If Zorin is for people who jump from windows to Zorin then what is next level linux distribution to choice? 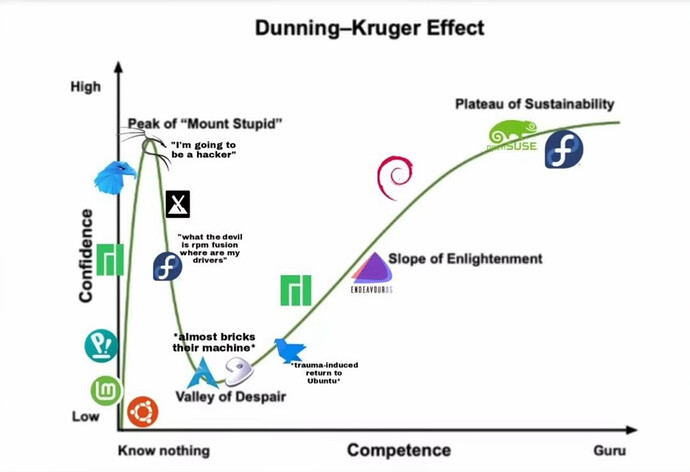 This killed me. My sides hurt...

I climbed the cliffs of Manjaro and said "nope", so I returned to camp Ubuntu enjoying a nice cup of hot chocolate. I did take a tour at MXLinux and I'm having fun with that, but unfortunately they have no chocolate.

I've heard of the view up in the plateau is quite nice, but the hike is too long and too slippery, and I don't have the right kind of boots for it. *sips chocolate*

Linux Distros you have tested:

Can anyone more described this tool. Testing you mean some time ago example 3 months? What type testing on games,stable about DE beautiful? Or just testing some distribution in your all life?

I'm just testing distros as I go... I guess.

Most diffrents only themes DE desktop they only can be diffrent with package ubuntu,arch, debian and slackware.
Someone sayed if something not working on some linux distribution then change and check if there will be all working what you need.
I don't mark distribution what installed and testing short time or used many years ago.

This made my night

I liked with many years experience check a vote and with tested linux that is correct Zorin,Manjaro,Mint most popular distributions.

Since I ranked zorin os first in my Linux Distribution Chooser tests, I researched and installed it as the operation and appearance were to my liking (used core at first, but later changed to Use lite) (I think it is necessary to display lite pictures and videos on the official website)

Can Zorin OS address the information gap? Chat about Zorin

Yesterday I tried Kubuntu, but the Japanese input method was not pre-installed, and later I installed various things that did not work.

Zorin OS is certainly good because it is easy to use and works reliably.

First distro that's slick and modern like a commercial OS. Simple and user friendly out of the box.