Well I did it again .... can't keep my big fat fingers out of stuff ..... I was customizing my desktop by changing some icons and themes from my Cinnamon DE (which appeared on Xfce) ..... everything went fine until I chose one .... to see what it would looked like .... when my taskbar disappeared completely .... when I try and open the panel in settings I get this .... 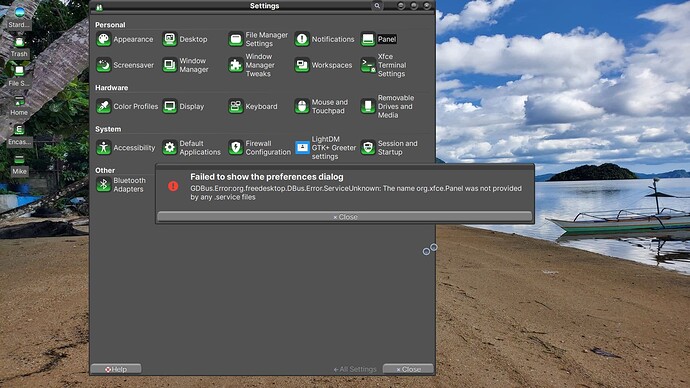 So I did a search on here and found where I had a problem with the panel before but not completely the same ..... I followed Aravisian's suggestion and did a Xfce panel restart ..... but that didn't work ....

0 upgraded, 0 newly installed, 1 reinstalled, 0 to remove and 0 not upgraded.

After this operation, 0 B of additional disk space will be used.

I don't know what the warnings mean .... I could just uninstall Xfce and reinstall it again as all my programs etc. from Gnome and Cinnamon were transported to Xfce so I'm sure they would do that again .... or at least I hope they would ....

So I did a install reinstall of Xfce and got this but still no panel (taskbar) ..... 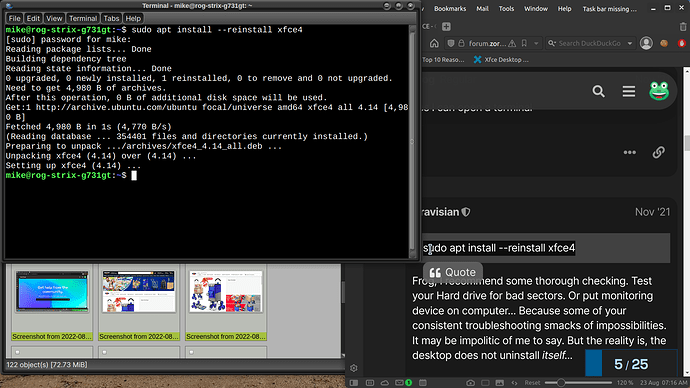 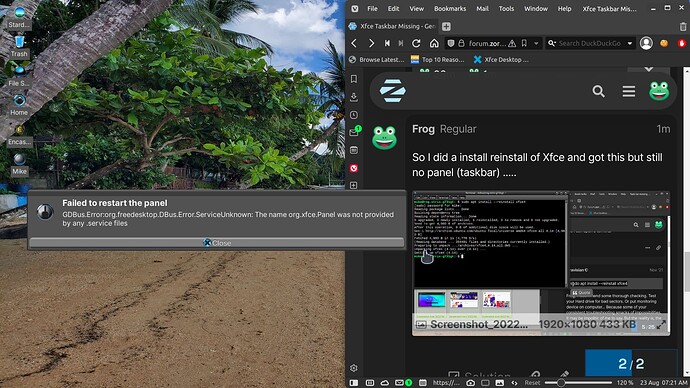 After spending hours on here and the net I finally decided to totally uninstall Xfce and found a decent way to then reinstall it again .... and surprise surprise .... all my saves .... installed programs and settings came back and the Panel is back to normal ....

Here is a person on this board with the exact same problem I had but it was never solved as he gave up .... me .... I just deleted Xfce and reinstalled it ....

Attempt to launch causes error message: GDBus.Error:org.freedesktop.Dbus.Error.ServiceUnknown: The name org.xfce.Panel was not provided by any .service files I’ve tried some of the solutions offered in the task bar problem without success.

Well it happened again ..... tried to use a icon and the panel disappeared .... so I used the following commands in the terminal .....

But it appears there are way to many icons I have for Cinnamon and Zorin that won't work on Xfce .... of which unfortunately the mass majority are Mr. Storms any one of which can cause my panel to disappear ..... 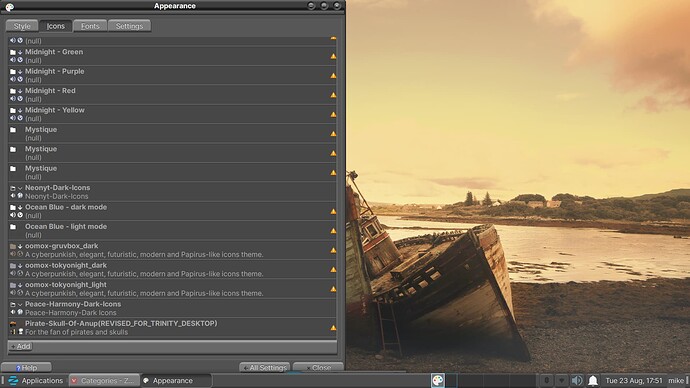 I'll leave this thread solved because I did find out how to get my panel back .... that thank god is solved ....

If you had have Timeshift installed it would have saved you even more time!

I totally agree but with so many other problems I didn't want to have any backups and just keep having reoccurring nightmares .... but now that I have .... it appears .... things straightened out it will be one of the first things on my list of things to-do today ....

You can change that setting to include personal folders. This is because usually personal folders can be huge. Never tried it but I suspect if you manually created the partitions the personal folders should remain intact as you are bloating the snapshots. That said I always err on the side of caution. You can enable personal folders - guess that is when it makes sense for snapshots to be saved to an external device.

Thanks I was holding off until I was sure I could save all my work as space is not problem as I will be using a 1 TB external HD so storage should be no problem .... thanks .....