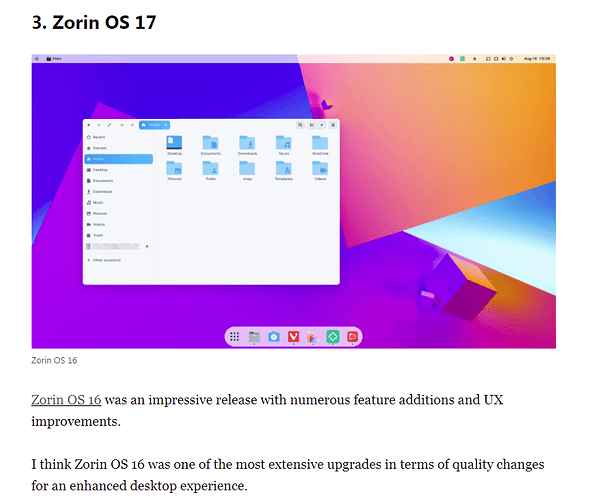 Would you mind sharing a link to the original article?

Moving forward to 2022, it's time to expect some exciting distro releases! Here are some of our picks that we think you should keep an eye on.

Changed from General to Chat.

wow, I read in that article that linux mint wants to do a change of look-and-feel. It will never be good-looking like zorin i think

I don't think Mint would change the UI very much in their next Linux Mint 21 but I find them very capable. They could make it look a lot better. Considering all the limitations that GNOME brings, Cinnamon is definitely more capable of customisation. The reason they are not changing the look is because they also want their OS to be transitional for Windows users and their OS to look more traditional like Windows 7 and 10.

As Gnome slashes GTK4, Linux Mint and other Distros may be left with little choice but to change the UI. The removals of UI classes that GTK4 brings means that key elements will not work.

Open Blender or GIMP or Photoshop or Inkscape... Open Libreoffice or Synaptic. Pretty much open any truly utilitarian WorkBench and you will see...

The toolbar is an essential work access tool, and most developers, designers and engineers are 100% well aware of this. A person simply cannot efficiently use tools like Blender without having quick, easy access to their tools. To have the tools hidden away makes a project take several times longer, as the user must hunt down their tools. You may think that a user will eventually learn their location.
No... not really. The toolbar enables you to see your tools at a glance and using Blender in this example... There are a LOT of tools! You will memorize basic location... But not the exact location of the tools. Most importantly, why break what works? Why remove the toolbar? Even if you could justify the notion that most users would adapt (which you really cannot), why make them do it?

GTK4 removed the toolbar. And the Menubar. And the steppers. Completely - as in... you cannot use them, at all.
Gnome moves on the Full-on belief that all applications must resemble Mobile. And they promote this by claiming that this is a "modern" trend. There is nothing modern about it - it is a step backwards, in fact. And it hurts the user.
And again we ask - Why?
As any abuser in a relationship knows, if you want control without building trust, the key is to Make the Other person Dependent instead of allowing them to be Independent.

This trend that Gnome is forcing onto all desktops means all users are bled of their alternatives and limited to the UI that Gnome dictates (Not to mention how Gnome4+ LibAdwaita locks in customization and appearance, as well. This, too, locks all distros in.)

Mint, XFCE and all other developers that are Not-Gnome have been painted into a corner by Gnome as Gnome seeks to undercut all others in order to drive them out and assert Gnome as the Dominant (and only) Linux Desktop.
Their only alternative will be to stick with GTK3.24 and use no later version to which Gnome need only point the finger at them after sabotaging them and use words like.
"outdated"
"modern"
and the like to disparage them. These words do not even apply - it is merely an illusion presented by Gnome in order to Gain Control...

... And the Users are falling for it... hook, line and sinker.
And the users absolutely will complain about the other distros saying "But their packages are old," "But their stuff is Not Up To date..."
It's a complete fallacy, but as we can see on this very forum already the users will definitely do this. They have faith that a bigger number = good, no matter what.

Gnome want control UI linux market and want be like in a game "monopoly"? Wondering who paying behind that when Gnome taken over control all this function DE interface design. The advertisement cost many money on websides.

I am waiting for new version Zorin pure xfce to support brothers Zorin. Gived people two ways gnome or xfce. Good choice. What you thinking about that idea? Will buying new adventure and experience with new version Zorin with something new to discovered how good that distribution.