I have an older machine, Asus I5, Radeon Rx 460. It came with Windows 10, which I do need to use the odd time, so I decided to dual boot and try Zorin 15.3. Initially when I first installed Zorin 15.3, I had no issues. Installed fine, booted up fine. Only issue was it didn't recognize my USB WiFi adapter. Turns out the one I had wasn't supported by Linux by default. Needed to disable secure boot to install the drivers for the WiFi adapter. Got it working, and reenabled secure boot. Then it stopped working. I figured I would have to leave secure boot disabled for it to work permanently and I wanted to avoid that, so I just bought a new WiFi adapter that's compatible with Linux out of the box. Plugged it in, and got the new one working no problem. Stupid me should have just left things as is, because everything was working at that point. If it's not broke, don't fix it.

I saw Zorin 16 came out, and decided hey maybe I should give this a go. Flashed it on a USB, booted via USB. It kept freezing unless I ran it in safe graphics mode. So I ran it in safe graphics mode to do the install. Installed fine. Rebooted, but it wouldn't boot into Zorin unless I added nomodeset in the boot up script. So I figured it was a graphics driver issue. Tried downloading the drivers for my graphics card and updating them, but couldn't get it to work. This is when I said screw it, I'll just go back to 15.3 where everything was working.

So I flashed and installed 15.3 again, however this time it wouldn't boot. Gave me error messages. At this point I figured I'd try a few different Linux distros to see if anything else would work - Ubuntu, Mint, and both 15.3 and 16 of Zorin. Nothing works. All these install fine but I can't boot into any of them. Ideally I'd like to stick with Zorin (prefer 16 but will settle for 15.3) if I can get it working.

I'd prefer to leave secure boot enabled (I know it is possible since I had everything working initially with it enabled). So here's where I'm at right now. I have 15.3 installed, but can't boot into it. The error message I get upon boot is:

error: /boot/vmlinuz-5.4.0-86-generic has invalid signature.
error: you need to load the kernel first.

I should note, whenever I do the install, it asks me to set a password to configure secure boot. I enter one. When I reboot, it doesn't prompt me to enter it. If I boot into Zorin via USB, that's when it prompts me to enter it to enroll the keys. I enter it, but still can't boot into Zorin regardless whether it enrolls the keys successfully or not.

Sorry for the long post, but I figured I'd have the best chance fixing this by giving as much information as possible.

Bootloader files can often get mismatch if multiple systems are installed. Here, we will see how to repair the GRUB bootloader on Ubuntu.

I just tried that now, and got to the end of the grub repair when I encountered this message: 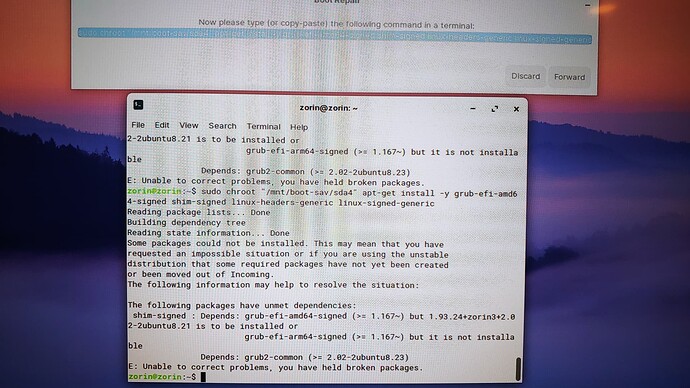 What device are you installing on?

Here's a screenshot of my BIOS utility screen. I have secure boot on, and would prefer to leave it on if possible. I did have Zorin 15.3 with dual boot windows 10 both working with secure boot on, before I started messing with things. 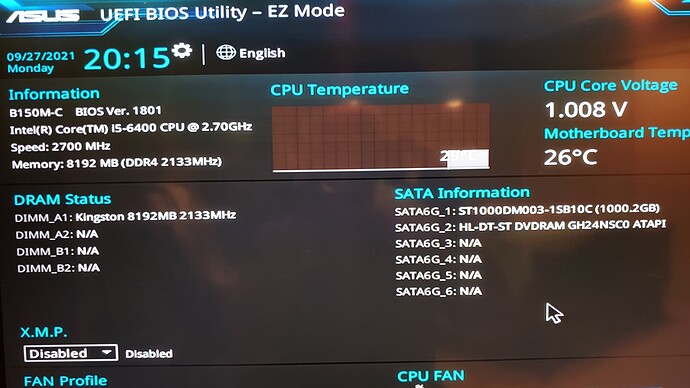 I have secure boot on, and would prefer to leave it on if possible.

This makes sense, as you are dual booting. But I wonder if you might disable it for the installation of Zorin OS, then re-enable it once complete.
Secure Boot can be hit and miss on Linux. It mostly works, most of the time.

This is because Microsoft must Sign For the Linux packages to permit them through secure boot. And Microsoft did sign... For most of the packages.

From the Boot Repair terminal - as seen in your screenshot - you may try preceding the command it offers with:

If your Apt Update produces any errors, that means the net connection is not working.
Other wise, proceed then along the path it outlines with the commands it gives.

Ok, so I tried that and I did get some error messages. Here's a screenshot of the terminal 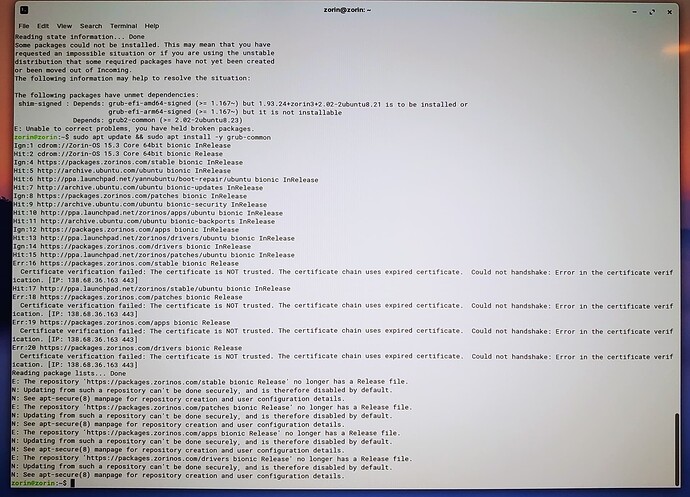 Forgive me if this is a stupid question, but is it just this one partition that's messed? If I were to say leave this sda4 partition with an unworking copy of Zorin (consider it written off), and tried installing Zorin again side by side with the broken Zorin and Windows, and partitioned another part of the hard drive for the second copy of Zorin, would that work?

Are you able to see your EFI partition in a partition manager?
If so, what size is it and is it at the beginning of the drive?

If the EFI partition is the issue, then using another partition may not resolve the issue. 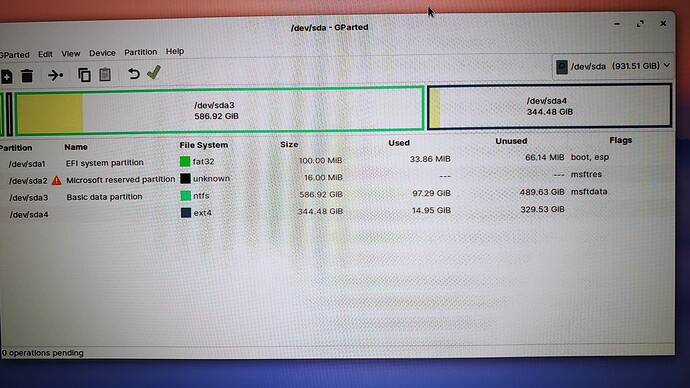 When I first tried upgrading to Zorin 16 (when 15.3 was working), I followed some instructions online here where it had me delete 2 partitions (sd4 & sda5), then proceed with installing side by side with windows. Since I've done that, whenever I install any version of Linux, I never see sda5 partition anymore. Could that be related to this issue?

I never see sda5 partition anymore. Could that be related to this issue?

I think that is unlikely.
Currently, I am worried your EFI partition is Too Small to accommodate the different boot entries. Could you please expand it to be 512megabytes in size?

It looks like the up arrow is greyed out beside "New size (MiB)", so it doesn't look like it'll let me 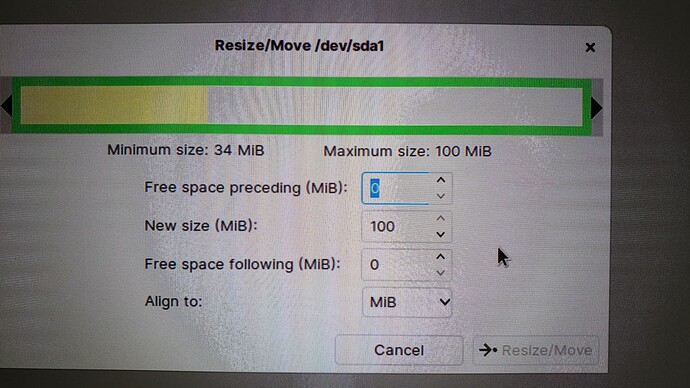 I think a guide is in order:

How to resize the EFI System Partition?

I agree, I've never seen an EFI partition that low before.

Did you double check the SHA256 checksum on the ISO to confirm integrity of the ISO is ok?

Which ISO burner did you use? I recommend Popsicle to make ISO burns if already on Linux. If on Windows, I would recommend Rufus or Unetbootin.

It might be best deleting all partitions off the drive, formatting the drive to GPT EXT4. And then installing Zorin OS all over again.

I think a guide is in order:

linux - How to resize the EFI System Partition? - Super User

Thank you for the link. It's an old PC that was given to me that I wiped and reinstalled Windows on only because I needed something at the time. Since it's something I work off, I can't take the chance of losing all my data at this time. But I do appreciate your help and the information.

Did you double check the SHA256 checksum on the ISO to confirm integrity of the ISO is ok?

Yea and yes. I did check the sha256 checksum on the ISO but only on the version 16. For some reason I can't find the checksum for 15.3 core as it's not listed with all the other versions.

Which ISO burner did you use? I recommend Popsicle to make ISO burns if already on Linux. If on Windows, I would recommend Rufus or Unetbootin.

It might be best deleting all partitions off the drive, formatting the drive to GPT EXT4. And then installing Zorin OS all over again.

I used Rufus for Windows. I'd prefer not format everything and putting too much time and energy into this as it is an old PC that I will need to eventually upgrade in the somewhat near future.

You said that you are planning to upgrade to a new computer in the future? How soon into the future? The reason I ask, is I have a strange proposition for you. If your going to upgrade in only a few months from now, why not just run the OS in LIVE mode off of USB?

I mean, unless you need to do production work where you require things to be saved after every session, you don't need to install. And if your not planning to do any gaming, you also dont need to install.

If you plan to just surf the web, check emails, watch Youtube video's, all that can be done in LIVE mode off USB. Just a thought.

Running live would be too frustrating. It'd be easier just to use Windows only unfortunately since I do have to use it for work anyways.

Ohhhhh, thats why you are using Windows! I get it now. Ya, I was wondering why those partitions were not removed off the drive, ya, that makes sens if you got to use Windows for work.

I tell you, its amazing feeling once you do get a new computer. When I got mine, I was so excited I could hardly contain myself. You should have seen how fast I went after those Windows 10 partitions, and sent them flying into the MSI black hole lol.

Yea hopefully I can find a good black Friday deal or grab a refurb off best buy if they have a good enough deal. It'll all come down to how much windows p****s me off between now and then