my zorin is still slow...

If you choose to clean then you must first rotate. i.e. this sequence of commands:

Maybe others will be able to help you some more.

My PC slows down even when my ram, swap, and CPU usage is very low. Please help me.

Are you talking about that desktop you posted a picture from ? Where all the dots where over the screen ?

If yes i strongly advice you to clean that pc up, you showed a picture from the inside and all i see was heavy dust.

I am talking about this picture

That might explain it...I did not know what speed was...until I replaced gnome with kde plasma on my 4GB RAM computer....And as far as kernel version is concerned, they depend on your hardware. I had some issues with 5.11 so I updated to 5.13 and all problems vanished. In fact updating to a newer kernel does not help always either, sometimes downgrading the kernel also works.
Your neofetch results: 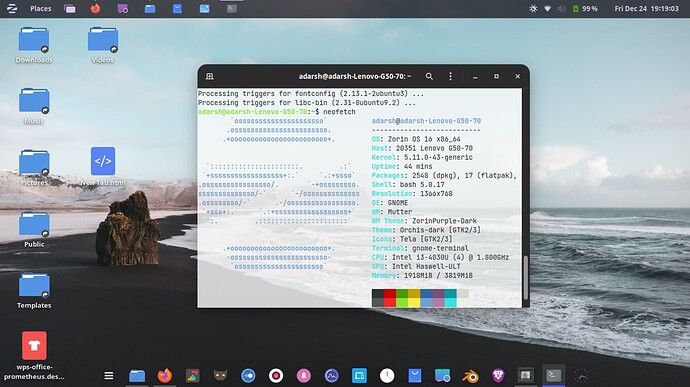 I would consider these system specs too low for running gnome environment. Why don't you try out Zorin Lite. Honestly though, I don't understand why gnome is so sluggish when other DEs like Kde Plasma offer so much more and yet it is so snappy.

What is the output of inxi -t cm?

As others have noted, your RAM is low.
I have 4GB on my daily driver and I tried Z16 - was fast only for a short time. So I switched back to Z15 and stayed on it.

@carmar That is an interesting revelation. Which flavour of Z15 and Z16 are you talking about. I have stayed on Z15.3 Core, but am considering update to Z16 Lite.

On my 4 gigger I found no noticeable difference in speed for many games (Z15 core vs lite). Some games though did run a little better on lite. Most importantly, I did notice that there seems to be no freezing on Lite. For me, freezing is when for a minute or so the whole desktop is unresponsive. Happened to me rarely on Core but so far not at all on Lite.

For Z16 lite, my wife is fine with it. She did have file folders close on her when copying large files. I had first thought this was a RAM thing because I noticed it on my Z15 lite on my 4 gigger. But with her 8 GB RAM, it likely points to my badly implemented replacement of thunar with Nemo. But this is a rare occurrence so no big deal and it shouldn’t impact anyone else who switches.

The only reliable method I can think of is to remove it completely (Using synaptic as described previously) and then reinstall it.

how to uninstall and reinstall kde ?

The website used tasksel to install kde plasma. You could have also done it using apt. I have some things in my mind that you can try but I would rather not because I am not sure about them. Try using synaptic as @Aravisian mentioned. Install it with:

but, i already have synaptic package manager

Ok. In synaptic->from the side bar->select kde plasma desktop. Then select all installed packages from the package list and mark them for removal. After you mark them all, hit apply all changes. It will start removing all kde plasma components.
Bonus Tip:
Create a backup just in case before attempting the above mentioned steps. It is a good habit to create a backup before doing something like removal of packages.

sorry for delay.
how to backup?

sorry sir i cant able to understand all steps here.
i have selected kde plasma desktop 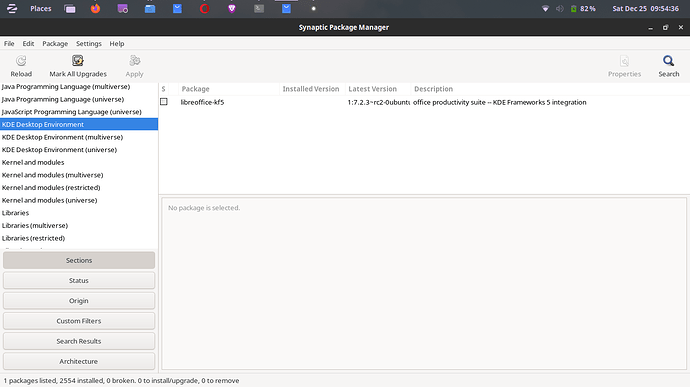 then what i have to do?

Although, things might not always go bad, backing up is a good idea. You can use various utilities like timeshift which comes with zorin os or clonezilla which many in this forum prefer to use. There are several tutorials on how to use them in the internet.