I am having problems installing Zorin OS 16.2 Core. When I select any of the "Try and Install" options and press enter, the screen goes completely black.

I have a Windows 10 installed on this PC with UEFI, with Intel and AMD GPU's. I have disabled Secure Boot. Motherboard BIOS at the newest version. I am attaching system info below.

If anyone could suggest something, many thanks in advance

Hi and welcome to the forum.
I refer you to this post, although I see you have disabled Secure Boot etc. Before you install

Did you check the SHA256 checksum of the downloaded .iso with the published value to confirm it is not currupted?

Which USB creation tool did you use?
Balena Etcher has been problematic for some, so I prefer Unetbootin, whilst others use Rufus.

Hey, zabadabadoo. I just checked the sha256 sum again to be sure - it matches. I used Balena Etcher. Previously I used the USB Creator Tool from that Ubuntu has, as I was on Ubuntu. I had the same problem. Can there really be a problem with USB creation tools, maybe some of them don't load drivers correctly or something?

USB Creator tool may be preferable to Balena Etcher.

Balena has a habit of wrecking USB sticks.

Hey, so I tried burning the .iso with Rufus. And another stick for luck. 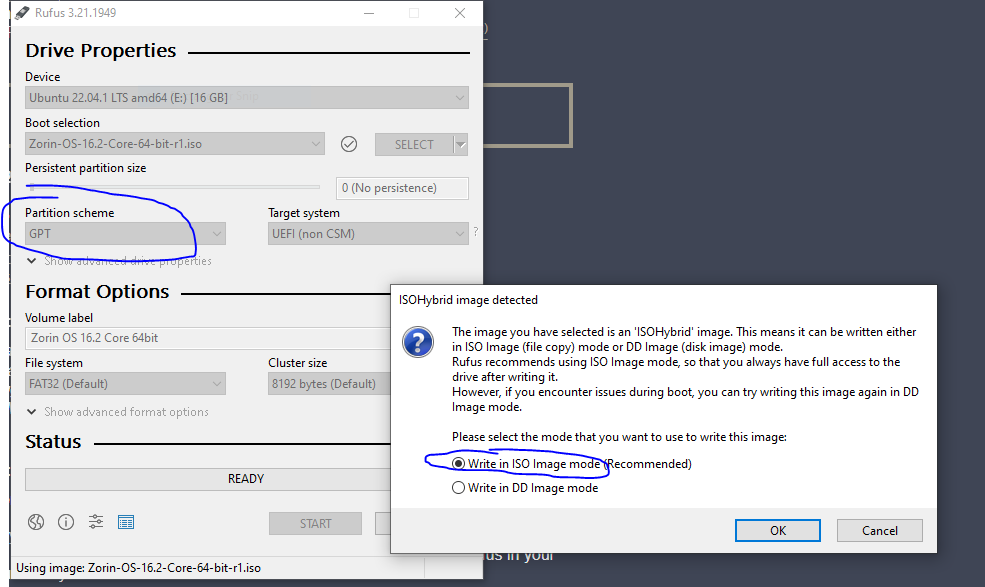 The boot worked! I believe that previously I might've written the image with MBR. As I'm dual booting with Windows which is with UEFI, I need GPT, since that's what's compatible with UEFI. And you need UEFI in both.

Thanks for the suggestion to try out other burners and sticks! And responding to my question, I appreciate it.

Now onto encryption. Man, I hate manually encrypting drives. Shame Zorin doesn't offer encryption as dual boot. Only when you override the existing system. Is there a quick link I can follow for Zorin? I can ofc first Install Zorin and I'll reinstall Windows later, maybe that involves less hassle.

Windows before Zorin is the normal sequence for dual-booting.

I would question the need to encrypt your drive, unless you are James Bond, as that often results in misery when things go wrong.

Some content re encryption in this thread may be of interest: Zorin not installing on second laptopDr - #4 by Aravisian

Yeah, well I don't need full disk encryption but at least have /home on a partition of its own and have that encrypted. I'm a software engineer and I have keys to systems, ssh, AWS and other keys, so no theoretical home intrusion can compromise those. I'll give it a go, I have sth in my mind.

Hi, For clarity which does not appear to have been mentioned for potential new dual-booters, space has to be made in the Windows partition. To ensure EFI is used this tutorial video is really good - no usb, no DVD, just the .iso!:

Hi and welcome. For the first part, please view this video: [How to Install linux without cd or usb | Dualboot | UEFI | Step By Step (2021)] Can't answer question on blue stack.

What about encryption truecrypt?
https://truecrypt.sourceforge.net/
Lavabit was used from Snowden.
What happens that all secure software? Project died?

Hi - don't know if this helps or not but I have the same issue: [Zorin 16.2 install problem - #47 by GeordiePaul](https://My issue of a blackscreen when installing Zorin)

Ubuntu and Mint work perfectly fine on the same hardware and I feel its the Zorin logo splashscreen that kills the install -- hopefully it can be removed/addressed in 16.3?