Ideas for running WhatsApp for Windows/Android on Zorin?

Zorin Lite 16.2 XFCE
My mum now needs WhatsApp voice calls on her laptop.
WhatsApp Web does not do voice calls. And therefore anything that's just a wrapper around WhatsApp Web, like all the Linux "desktop clients" WhatsDesk, WhatsApp-for-linux, Ferdi/Franz, Rambox etc cannot do voice calls either. (And 99.9% of what I find on the web about WhatsApp on Linux involves one of those web wrappers.)
So that leaves a few options that I'd like to get the forum users tips or experience on.

So before I attempt anything, any tips, experiences etc from y'all would be much appreciated, thanks.

WhatsApp for Android in an Android emulator.

One of the android emulators I used to use is called Nox, though that's for Windows and Mac. You could try Anbox (Android in a box). https://anbox.io/

Guest Opinion: WhatsApp is among the most widely used platforms in the world, and most users stick to it because of its supposed strong security protocols and a strong focus on user privacy. However, is WhatsApp really as secure and privacy-friendly...

I would advise using Jitsi over whatsapp as it is more secure. There is an Android app for mobile use, Jitsi Meet and for the desktop no software needed as it runs inside a browser such as Firefox. https://meet.jit.si

but I've never heard of Portapps.io before today. Any idea if it's trustworthy?

I've used portable apps to create bootable toolkits. The applications offered are reputable, normally without a few extras to ensure lite fingerprints (low resource usage). This sometimes means less features, but for the most part it removes the requirement of installation and any integrated ad or reporting aspects of the application (not regarding support, but info gathering aspects of the app).

Thanks, Anbox looks interesting, a sort of Wine but for Android.
The instructions on installing kernel modules are doing my head in, but hopefully I can get through them eventually.
I'll report back with how it goes.

I'd love to get my mum using something FLOSS and secure like Jami, Jitsi etc... but that could be bad for the people she's communicating with. They're in China (the ones she's talking to in WeChat) and Hong Kong (where WhatsApp is still OK... for now).
Just having something like Jami on their phone (or Jitsi in their browser history) could get people into trouble there. And she doesn't want that, nor do I.

You may want to try waydroid, there is a tutorial in the tutorials and guides section of the forum on its installation. Similar to anbox, but it uses Linux system libraries to integrate Android applications into the system itself. While it is a solution, Android and windows are the two most targeted systems for ransomware and viruses. A good reason for her to suggest another software that can be found on Linux, even if her team remains on windows/android.

In the tutorial video, it specifies running in Wayland but I'm in X11.
Also from Googling, Arch Wiki:

Waydroid only works in a Wayland session manager

I know nothing about switching from X11 to Wayland, what that would involve or how that would affect everything else on this system. (But I suspect it would be major.)
I see a few comments about something called "Weston" to allow a "nested Wayland session" within X11. Again, I know nothing about making that work and whether I could realistically expect my mum to do it whenever she needs to use WhatsApp.

As for alternatives to WhatsApp, it would need to be something that wouldn't get a Chinese person in Hong Kong (and who often travels back to mainland China) into trouble just for having on their phone. Things like WeChat, Skype and Zoom are acceptable to the mainland authorities, WhatsApp is excusable for someone working In HK, but things like Signal are out of the question. Just having it on their phone could make that person a target for investigation/punishment.

WhatsApp is built into Opera browser , but I've not used it myself. 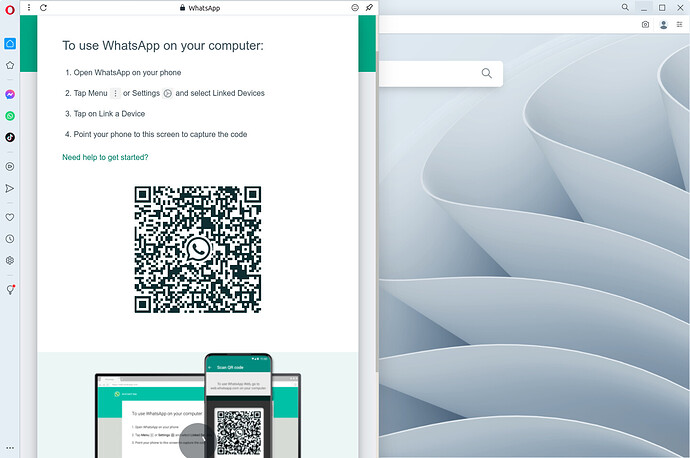 I wouldn't touch Opera browser these days as it has become a data miner.

it has become a data miner.

Totally. And also, it's Chromium.

Thanks. Unfortunately it looks like it's WhatsApp Web, and if so that means no voice calls. 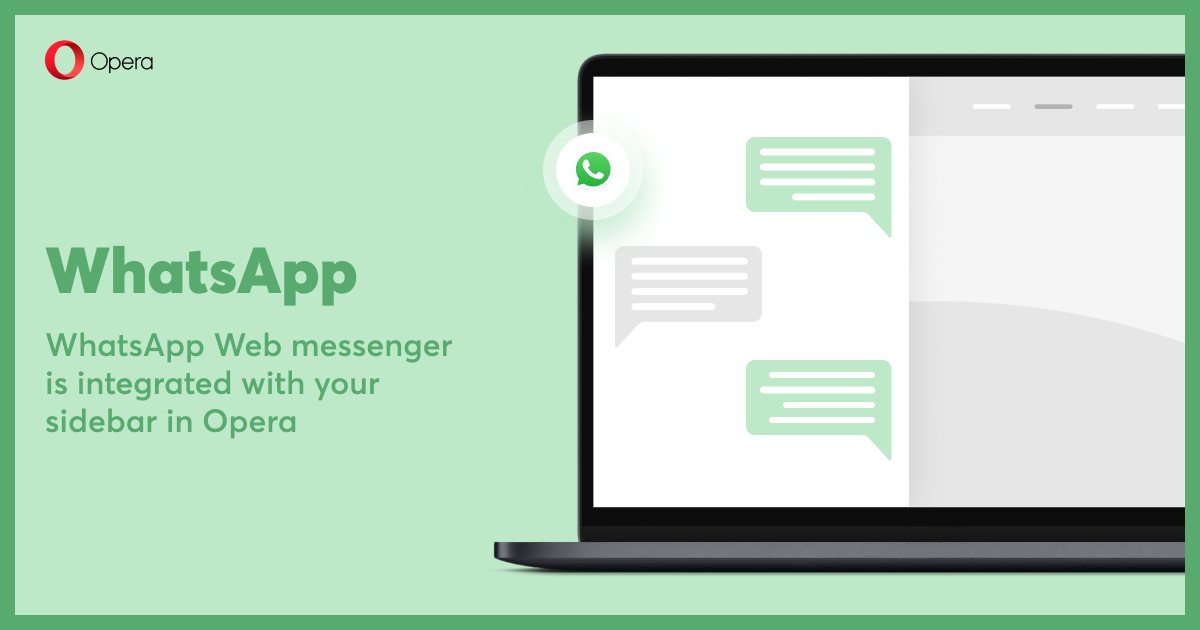 WhatsApp Web messenger is integrated with your sidebar in Opera for computers, so you’ll never miss a message.

I had remembered seeing whatsapp on Opera and installed to check it out. I haven't used it in a while . Any browser can be a data miner depending on how it is used and set up. With the exception of Firefox most better known browsers are chromium based.

TLDR: Option 2 (WhatsApp for Windows Portable version from PortApps in Wine) did not work for me.

And now here's the long version, so anyone else who needs WhatsApp on Zorin can learn from my mistakes.

So it looks like WhatsApp-portable from portapps.io is not an easy-to-get-working option. (And it looks like Zorin will repeatedly try to divert me away from the program I'm trying to install & use and trick me into loading a web page instead!)

I think tomorrow I'll have another go at option 4, e.g. trying to understand the kernel module instructions for Anbox. 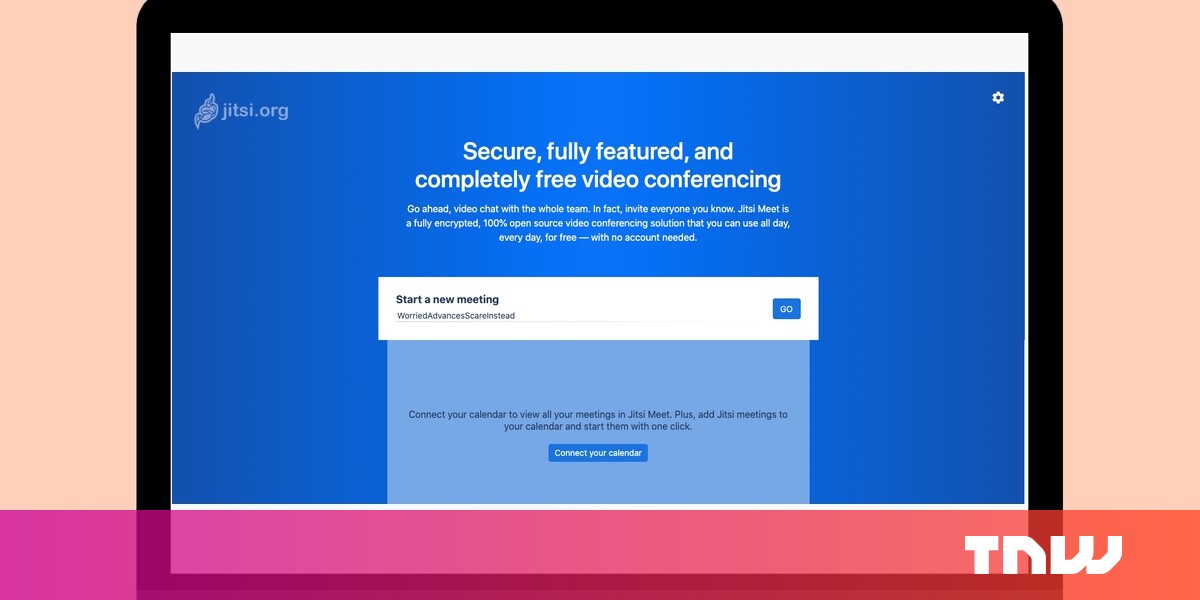 The coronavirus pandemic pushed people to stay in their homes, and in turn, forced them to use video conferencing products. In the past couple of months, Zoom became an almost indispensable app, Facebook had to step up and make a rival prod

Your post spurred me to look again at Jitsi and other FLOSS options like Jami and Element (I even got my mum to install and try out Jami).

But the more I look at those options, and the more I speak with her about her usage of WhatsApp, the less likely it seems any option will satisfy all her needs short of having WhatsApp with voice calls on the laptop.

Either the problem is China (even Skype just got removed from the App Store there), or included features, or her contacts, or ease of use, or hardware, or something that never even occurred to me before, or all of the above. Every time I think I've got a workaround for one issue, I find out it conflicts with another or even creates a new one.

So while Jami or Jitsi may work for a few of her contacts and WhatsApp Web for a few others, it looks like, if I'm really to get my mum to accept Linux as an alternative/replacement for Windows, WhatsApp with voice calls is a must. 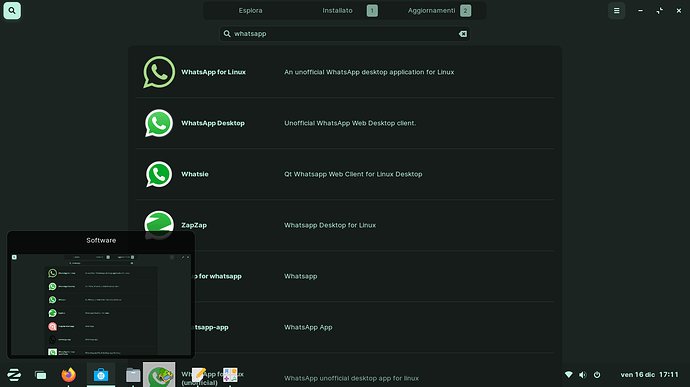 As I wrote in my original post, those are all just wrappers for WhatsApp Web, which cannot make voice calls.

Oh, yes, sorry, now that I read again the original post I saw it, sorry. I checked more and found Ubuntu WhatsApp desktop app with call features, the last 2 messages there are quite interesting, they say about Signal and other ways to do voice calls (if you may like a similar application with voice calls in the meantime). It's better to try seeing if at least one of alternative apps/websites can do what you'd like rather than waiting for a certain feature to be added (if it's planned to be done or even considered at least), just to not wait and wait with no concrete results. 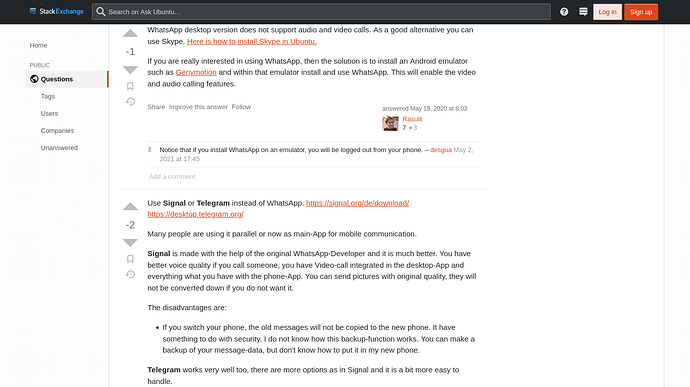