No sound from speakers on hp spectre, HDMI sound works

what i know:
I had sound issues while on windows as well. updating the drivers didn't work, the only thing that fixed it was running the hp support assistant audio troubleshooter which said it 'repaired the drivers'. my sound would work for another day or two and cut out again causing me to repeat the process many many times.

since installing Zorin (and about 6 other distros while i distro hopped lol) my speakers didn't work on a single one. i've done fresh installs of zorin many times which didn't work either.

here is my alsamixer settings 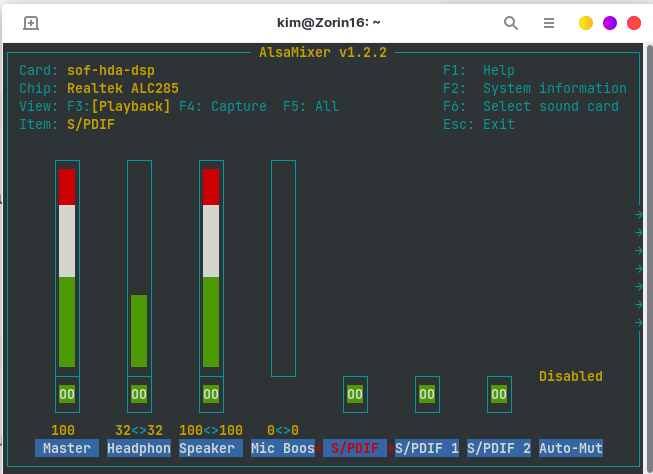 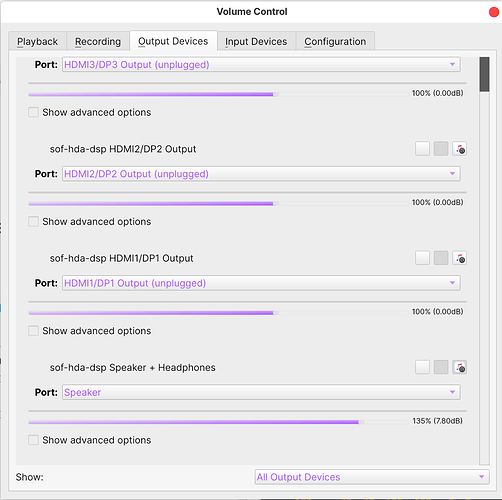 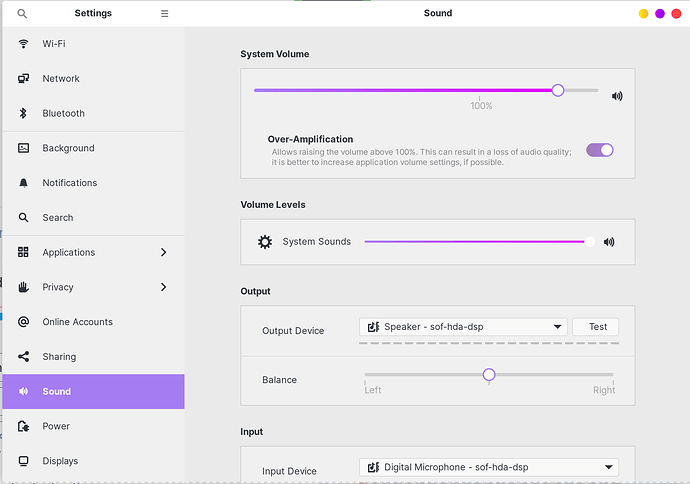 i tried this troubleshooting article among several others
https://www.ubuntupit.com/how-to-fix-sound-issues-on-ubuntu-troubleshooting-for-newbie/

any other ideas would be greatly appreciated! thank you in advance!

In the third screenshot, can you change the output device in the drop-down menu and send me the screenshot of it?

In alsamixer what sound card options are listed if you hit [F6] ? 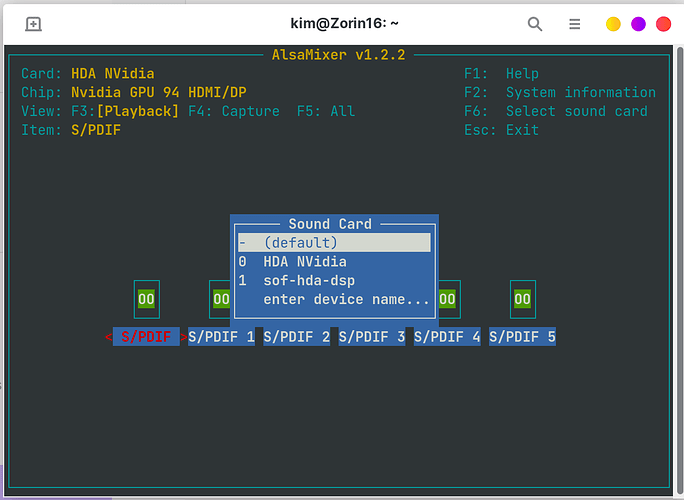 Thanks for the article! but no luck sadly. here is the output of sudo aplay -l where sof-hda-dsp shows as 0/1 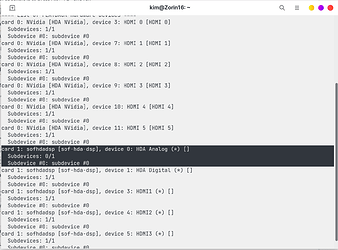 This may be a naive question... But have you tested sound on a Different set of plug n' play speakers?

oh the speakers are my laptop speakers not a separate set of speakers. that's if i understood you correctly, my bad if not

Yes; I mean if you were to plug in a separate set of speakers, then test sound. This may help evaluate the hardware, since they also had trouble on Windows, too.

i see i see. yeah using speakers do work i can hear audio when connect to a bluetooth speaker. i dont have any wired ones to test that avenue though

i can hear audio when connect to a bluetooth speaker.

This is similar enough, though... It suggests that the issue is not software or driver related, but the hardware itself.

i feared as such, thanks for checking it out I really appreciate it. quick question, if i dual booted windows and got the audio working using the troubleshooter again, would that carry over if i rebooted into zorin?

i feared as such, thanks for checking it out I really appreciate it. quick question, if i dual booted windows and got the audio working using the troubleshooter again, would that carry over if i rebooted into zorin?

I cannot fathom how it could. It might, because computers are Weird... but I would hedge no bets on it, much less it being lasting.

So... hypothetically, IF a computer Operating System can communicate with a piece of hardware, that allows or causes the Hardware OS to reboot and clear out a corruption in its own operating system software, it is possible to restore that hardware functionality. This is complex and rare.

Which kernel are you using? Had issues with sound for the longest with my Dell XPS 9710. Moving to kernel 5.11.43 resolved the sound issue, however this lts kernel is end of life and did not resolve all of my issues, specifically with thermals and cooling. Had no choice but to move to new lts kernel 5.15 , but I have new issues not related to hardware. Hope this helps.

im on 5.11.43 rn. i havent upgraded a kernel myself before, do you have any tutorial recommendations maybe? upgrading may not be so bad but im not sure how to revert back if it doesn't work

Linux Kernel 5.15 is Out! Here’s How to Install in Ubuntu

Linux 5.15 was released yesterday as the new Long Term Support (LTS) kernel release. Here’s what’s new and how to install in Ubuntu. Linus Torvalds announced the release of Kernel 5.15 …

@kiwi_dragon Before going down the new kernel route, I would boot Windows and from windows check if there are any new drivers for your machine especially audio.

You also said in your OP that you "took my laptop back to best buy". Does that mean sound from internal speakers has not worked from new?
If that is the case then maybe you have faulty hardware which should be repaired or laptop replaced by the retailer under warranty.

yeah it started cutting out maybe a month or two after getting it. i put windows on it last night to get the sound back and now im debating whether i want to dual boot zorin on it or not to troubleshoot the audio further. i can get it shipped back to hp for a fix but it's been too long to do an outright exchange

No guarantees but you could try this tip?

Wasn't sure if this was a nod to me! Give yourself ownership of /etc sudo chown [your user name] etc then create a folder and call it 'pulse off' and drag the pulse folder into it. Now add all the ALSA mixer packages you can find in Synaptic Package Manager but not the ones for Jack or Pulse or OSS. Also install QAS Mixer, QAS Config plus one more whose name escapes me. Launch QAS Mixer and you should see your audio device at bottom of mixer window unchecked. Check it and you should hear a s…