Is there any prediction of when it will be released in the stable version of zorin os 16?

A quick google search could have helped you find an answer to your question. If you would have googled "ZorinOS 16 release" one of the first results would have revealed, without even opening the website, that the expected launch date is around June - July this year.

I hope I could help.

Googling led to this: A first look at what is new in Zorin OS 16 Beta - Real Linux User

Release dates can change and an article from January, for example, may not relay accurate information. I think it's a fine thing to directly ask on the Zorin Forum.

Yes, i could have researched in English.
I do not know English. all of my research I did was in Portuguese. so it would be more difficult to find.
Thanks!

@Aravisian Would you know if version 16 will feature the Lite edition?

This has been asked in the other thread, but I will answer it here as well. Yes, OS 16 will feature a LITE version a few months later. I think the first edition will only be ULTIMATE though, the paid version. I could be wrong though, CORE could also be releaseing then.

For users who don't upgrade to OS 16 right away, later in the year, they will have an upgrade functionality added where you can simply upgrade from OS 15.3 to 16 withought having to install new.

When is Zorin OS 16 final release?

According to the developers, around June 30.
Regards

The last hours of june passes by

Hello:
Probably the stable version will be released very soon, during July.
At this moment they are in the last stage: the translation of the operating system into several languages.
Regards

I would assume Zorin OS 16 final to be released start of August, with maybe 1 more beta release, idk just me, don't take this as fact

Hello:
All dates that can be given regarding the release of the stable version are approximate.
The important thing is that the release contains very few problems (bugs).
You have to consider that very few people work around this project (much less than the Linux Mint stable team, for example).
Now, erring on the side of optimism, taking into account what is happening in Github, I still believe that the stable version will be released this month, July. Let's hope so because during this month I'm having a birthday. It would be a nice present.
Regards. 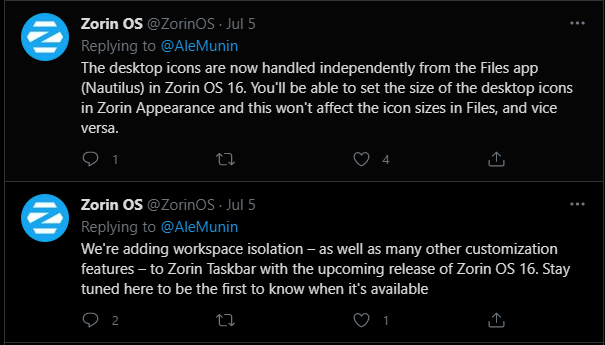 This may be a clue. From Zorin OS twitter.

Hello:
From the looks of it, at the moment, they are focused on fixing some issues with zorin-icon-themes.
Thanks for the info.
Regards

Hello:
From everything I have been able to observe, I still think it is more likely that the stable version will be released in July.
It would be great if it came out on July 26, since it's my birthday.
I am so looking forward to it that I even ordered the birthday cake to have the Zorin Os logo on it.
Regards.

since it's my birthday.
I am so looking forward to it that I even ordered the birthday cake to have the Zorin Os logo on it.

Seeing 3 Replies I thought it was launched.