I noticed the kernel was 5.4.something. But I noticed kernels are now up to 5.13. How do I upgrade the kernel? I’m pretty new to Linux.

You may want to peruse Zorin OS 16, instead.

Currently, the Zorin OS 16 Beta comes with 5.8 kernel. This is highly likely to Climb once Zorin OS 16 is fully released.

When it comes to a Linux kernel - the newest is not necessarily the one you want. As the kernel number climbs upward, this means that the kernel version includes patches or additions for newer software. If you are running an older machine- those additions would mean nothing to you. The newest Kernel is also rolling release - which means it may have Fresh new Kernel bugs and issues that have yet to be ironed out.
As long as a computer works properly on an older kernel - then that is the kernel that you want. Upping to the newest, just for the sake of seeing a bigger number on your kernel, can actually lead to problems. Let the vetted kernel come to your system from the developers that have tested it in order to have the best results.

You can upgrade your kernel by installing the version that you want. While you are on Zorin 15.3 Ultimate, you should be able to install the latest kernel in Synaptic (If you need synaptic, you can install it with sudo apt install synaptic in terminal).
Open Synaptic, then click the Search button. Enter into it "linux headers" and then Select the version of the Mainline Signed Kernel you need. You will need
Linux Headers
Linux Image
Linux Modules.

You can also download .deb files of the Kernel (Four parts Total) and install them with One Terminal command easily. Just place the four .deb files into a folder by themselves, open a terminal in that folder or cd command to it, then in that terminal run sudo dpkg -i *.deb and it will automatically install all the packages in the correct order.

Once installed, reboot to test the newer Kernel. If the newer kernel enters kernelpanic or does not work properly, you can revert to the Old Kernel by holding the Left Shift key at boot to bring up the Recovery Menu, then selecting "Advanced Options", then choosing to boot from the previous kernel. Once logged in, you can uninstall the Newer Kernel.

I noticed as well. Nicely done.

Z16 I assume?
Note: Whilst maybe considered obvious to some, please make that clear to avoid confusion whilst we have Z15 and Z16 versions running in parallel.

Zorin 16 Beta, yes. It's not obvious, I just wasn't using my head when I posted it in a big hurry.

I prefer manually downloading kernel. It feels nice, like I am powerful user ( I wish

) and in the meantime, I am learning.

atm, I am testing liquorix 5.13 kernel. It is nice, playing really well, and I notice that I got less errors during boot with them xD

If you are running an older machine- those additions would mean nothing to you.

This!
My husband is happily using 4 series kernel with MXLinux so as my Volumio. When stability counts, nothing can beat the old established kernel (as long as it is supported).

I tried MXLinux, as it is really famous on Distrowatch, but it didnt behave really well on my laptop. And had a few issues while installation and after

but it didnt behave really well on my laptop.

Which version did you try?
If your hardware is a newish one, you need a hardware enablement version (with kernel 5 series).

Latest one, think it was beta, MX-21 xfce

Latest one, think it was beta, MX-21 xfce

Latest ones also have series 4 kernel and series 5 kernel.
What you need is this:

MX-19.4.1_x64 “ahs”, an “Advanced Hardware Support” release for very recent hardware, with 5.10 kernel and newer graphics drivers and firmware. 64 bit only. Works for all users, but especially if you use AMD Ryzen, AMD Radeon RX graphics, or 9th/10th/11th generation Intel hardware.

Thanks, good to know
But I am happy here, with Zorin

Thanks, good to know
But I am happy here, with Zorin

If you are OK with systemD, Zorin is the best distro

I am using arm version of MX as our Wordpress server. 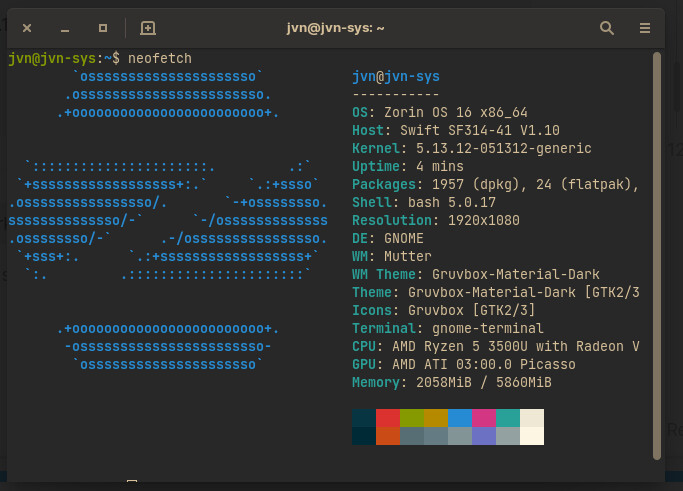 Any idea's how to bypass that ? or how to install libc6 ?

or how to install libc6 ?

Installing libc6 2.33 on Zorin OS will break a lot of stuff. The integrated packages are set to the Focal Fossa Universe.

Which... honestly, should be more than high enough.

As it stands right now, there is no easy way of installing higher than the 5.11 kernel as the end user. ZorinGroup may update the kernel in time, bypassing that problem.
I do not think this is unrealistic as Zorin OS 16 released with the 5.11 kernel.

Yup.
With Zorin OS using the 5.11 kernel, what this means is net-searching troubleshooting for either Ubuntu 21.04 or 20.04 will likely lead to solutions that also apply to Zorin OS.