To Whom It May Concern, I installed Zorin 15 Lite (32-bit) on an old laptop, because this OS is promoted as an alternative for Windows 7. Mostly, I’m happy with it. However, it is significantly slower than Windows 7. A single application, such as Firefox of Thunderbird, can max out the CPU. Partly this is due to the old hardware. But the same hardware runs significantly faster on Windows 7. My understanding is that Zorin 15 is supposed to be lighter than Windows 7. I’ve searched the forum and can’t find any information on this topic. Does anyone have any guesses about why Zorin might be running slower? I can provide further information if needed. Any help would be appreciated. Thanks.

Regarding resource consumption, can you check your System Monitor to see what other programs are running that are consuming the highest resources (after Firefox)?
Could you also mention your system specs? Is this happening on certain websites? Is this happening throughout the duration on a certain website or does the resource consumption drop at any time?
For us to get a better picture, could you also provide the corresponding CPU, memory usage on Windows 7 for the same websites?

Regarding speed comparison, would you mind elaborating on how you measured the performance difference? The only concept in my mind is browsing speed, but I may not be understanding properly. I’d appreciate if you could clarify.

Thanks for your response.

Apologies for being unclear: Firefox is not the problem. It was only an example. (Re: the link you provided, I did try disabling all add-ons in Firefox, but it doesn’t seem to make much of a difference.) In addition to Firefox, most applications are performing more slowly: e.g., Thunderbird, Rhythmbox, LibreOffice, and so on. Basically, two or more applications seem to consume almost 100% of the CPU between them.

Regarding speed comparison: I’m not using an objective standard of measurement. But I am noticing that I’m watching a spinning disc and waiting. The laptop fan is also wheezing more often.

In Zorin 15 Lite, there doesn’t seem to be a System Monitor. However, Task Manager shows over two hundred processes. In addition to the applications for which there are recognizable icons (Rhythmbox, etc., mentioned above), I see pulseaudio, Xorg, xfwm4, and other processes that I don’t recognize, using small amounts of CPU.

RAM isn’t the problem. Task Manager is reporting only 45% usage, and 0% for Swap.

The BIOS is up-to-date. And I have checked for additional drivers. My understanding is that Intel drivers are already bundled with recent Ubuntu-based distributions.

To be clear, I’m happy with Zorin. I prefer it to Windows. But if you have any thoughts about how to optimize Zorin for this old laptop, I’d welcome them.

Regarding the laptop fan running more often, can you do the following? Zorin Menu -> System Tools -> Software Updater -> Settings -> Zorin Software -> make sure “Download from” pointing to the Main Server. Now switch to tab “Additional Drivers” and see if anything shows up. On my desktop, my GPU fan was constantly running until I switched drivers. I understand yours is a laptop with integrated graphics but it always helps to check for drivers, regardless of the situation.

On your task manager/system monitor, when you don’t have any other open windows, can you sort the processes by CPU usage? I am using Core and if I click on my “% CPU” column, it sorts by highest (or lowest, a toggle). Alternatively, enter top in your terminal (ctrl+alt+t). If you can do that and let me know what your highest processes are, that will help.

I realize you gave Firefox as one example but since Firefox typically consumes more RAM than CPU, I thought I’d ask. Don’t worry about low swap usage.

Your issue sounds most similar to Web Browsers freezes up Zorin but it is not necessarily the same. Besides, there was no resolution to that topic, so I am not sure it can help besides giving a heads-up.

Thanks for your response.

Regarding “Additional Drivers”: yes, I’d tried checking the updater for additional drivers before my first post. Nothing. (Before my first post, I also updated the BIOS, because I’d read that it might help quiet the fan. I think that it did help, a little.)

Regarding Task Manager and sorting by CPU usage: yes, I’d sorted them in this way when I checked before my last post. Task Manager itself is using 25% CPU. The other processes were the ones I mentioned. Currently, Firefox seems to be using from 20% to 30%, Rhythmbox is using around 10%, which seems like much less than previously. Then there are the other processes I mentioned, using less than 5%.

I appreciate your help.

Could you please use top and let me know those results? That should eliminate your task manager - please make sure you close it first before running top.

I’m not sure how helpful the results will be, because the tasks using CPU change by the second. But here is one snapshot of the top results:

But in the next second some of these results would be replaced by firefox or pulseaudio or something else.

Thanks, cnimi.
Would you mind trying one more set of commands? In terminal, sudo apt install htop and then htop. This one will show you a more complete list of processes. So, for instance, you may see a whole bunch of “/…/firefox” or something like that. Can you identify the highest group? For example, if there are a whole bunch of firefox processes typically coming up high. This will also change the output, so it will come down to your eyeballing the output and giving me your best guess of what group of processes typically come up high. We have to identify at least one process that is consistently high, otherwise there is not much we can do.

Finally, could you also make sure your Software Updater settings are similar to the pics I posted here? Installing Samsung printer and scanner driver
If not, then please change as in those pics and then run the Updater and install any new updates.

Thanks for your response. I’ve tried running htop, as you suggested. It looks much the same as top and Task Manager. Over a hundred tasks with a handful jockeying for the top ten lines, with the order changing by the second. These include entries for rhythmbox (2), pulseaudio (2), xorg, firefox (3), xfce4-terminal, each using between 1% and 10%. I can’t say that there is a single group that is consistently high.

The total CPU usage fluctuates from approx. 15% to 50%. The total usage jumps by as much as 20% when I do something such as moving the cursor, and becomes momentarily overwhelmed at 100% (along with the fan) when I launch an application.

Is it possible that my old CPU doesn’t have the right driver (I did check “Additional Drivers”)? As I mentioned before, my understanding is that the Linux Intel drivers –

INDUSTRY-LEADING OPEN SOURCE GRAPHICS DRIVERS Intel® open source 3D Graphics Drivers for Linux* are the industry-leading drivers for Linux* distributions for all Intel® graphics platforms shipped over the last decade. Because these drivers are...

– are already bundled with Ubuntu distributions such as Zorin. But maybe my CPU is too old? The reason I ask is that Zorin /looks/ better than Windows 7. Under Windows 7, there was an option to optimize for performance OR appearance. I had it set to the former: it looked worse, but performed faster. Is there a similar option in Zorin?

cnimi,
Yes, you’re correct. All the repositories I showed for my machine would not be specific to your Updater settings (like Wine, etc). Thanks for checking the Additional Drivers even though you didn’t find anything. That would just be for the GPU, not the CPU but it was worth checking.
On the Win 7 appearance option, I guess you mean this. I use Core and there are options under Settings -> Appearance to disable Animations or Dynamic background opacity, etc. I am not sure of the exact options under Lite since that has XFCE desktop as opposed to Gnome, so I can’t walk you through the exact path to those settings. But if you disabled things like these, that would be the equivalent of the Win 7 option.

Thanks for your response. Yes, you’ve identified what I meant about making adjustments to Windows 7.

In Zorin 15 Lite, there are four tabs of options for adjusting appearance, but none of them include anything like animations, and none of them seem to affect performance. For example, I did create a cache file for the icon theme, but it doesn’t appear to make a difference. 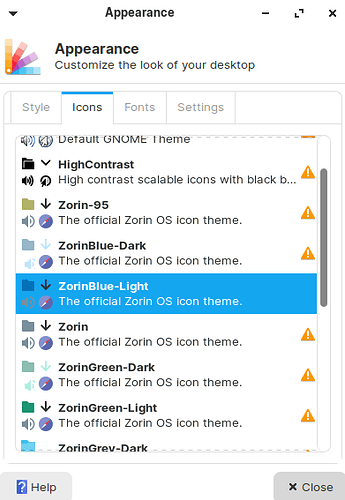 Some applications continue to lag. Rhythmbox, for example, never seems to stop loading, and Zoom is unusable because it delivers what is basically a stammering series of still images instead of a continuous video stream.

Apart from looking at Task Manager, top, and htop, is there anything that could be done to optimize Zorin 15 Lite for old hardware?