Please correct me if I'm wrong but I thought the Ultimate and Pro version was to have like 20 games installed. Mine has 5 ????

This is a good question. I recall Zorin 15 Ultimate had quite a few. Zorin OS Core comes with more than Five Games...
I looked around the Zorin OS webpage to see if I could find a List of the installed apps but had no luck. In fact, the New Zorin OS Pro does not list games as a feature at all as Zorin OS Ultimate used to.
Perhaps the changeover to a "Pro" version is more than just a name, focusing more on professional and productivity apps.
I may load up a copy of Zorin 15 Ultimate and look at the Game suite there and see if I can make a list of what was included on Ultimate...

I remember the website saying 15 Ultimate came with over 20 installed games and now it's gone.
Hmmmmmm . . .

Dear Zorin OS team, please fix this issue ASAP . in zorin os ultimate there is a game called supertuxkart but the game promotes inappropriate content to children . So it labels itself as a Kids game but the truth is that this has content that kids shouldn't see . there is a level in the game called 'Grand Paridoso Island' and when you ride a little in that island you will see women in Bikinis . so please remove this game from zorin os ultimate edition ASAP .

Just looked over several websites talking about 15 Ultimate and they all say it comes with over 20 games pre-installed.

Hello Zorin developers, what's the story on only 5 pre-installed games on 16 Pro?

I sent a message to the ZorinGroup in regards to this issue. Hopefully they will address it publicly soon.

I think it may that they are making a Game Edition.

I am also confused about this.

why be less than zorin os 15? will there be a zorin 16 game version?

Yes. They have announced a Game Edition. 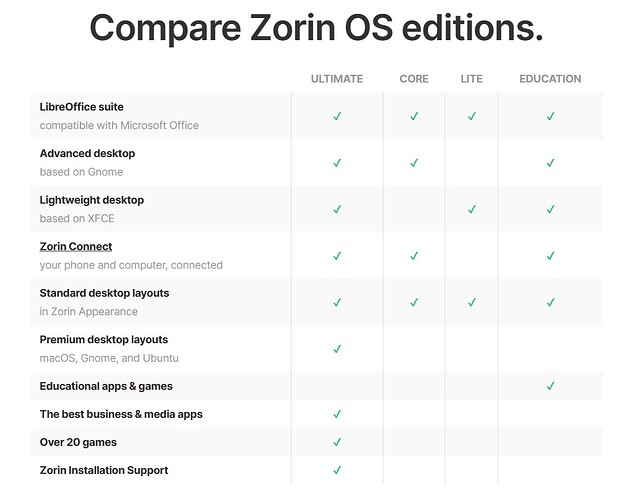 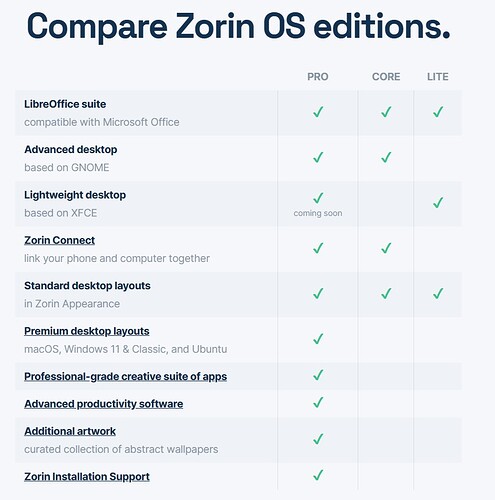 Personally, I think that it is a smart move for Zorin to pull games from the edition that they are trying to sell to businesses.

... and it's not hard to install those games by yourself. Personally I prefer games from Steam

Personally I prefer games from Steam

Yup. Me too. Most of the games in the repository are, well, dated.

The most interesting thing that Zorin has done in terms of Zorin 16 marketing is to market the Education edition separately from Core/Pro/Lite -- no longer in the Comparison Chart, and a separate download page, for example.

Yeah, but you paid for those garbage games and didn't get them. You should get what you pay for even if it's trashy games. Lol.

Since 15 Ultimate came with over 20 games and it's advertised 16 Pro will be better, you assume more NOT almost none!

In the absence of communication from Zorin, most of us expected Pro to be a rebranded version of Ultimate, and nothing more. For that reason, I suspect that most who paid for Pro expected Pro to have "over 20 games" pre-installed because that was the way it was with Ultimate.

The two comparison charts I posted in an earlier comment suggests that Zorin both rebranded and repositioned Pro, refocusing Pro on business users ("Advanced Productivity Software" and "Professional-grade creative suite of apps") rather than individual users.

That makes sense to me. I come from from a business background, managing IT at the enterprise level. I've been evaluating Zorin Core Beta for a specific use case, but use Solus as my daily driver. As I became familiar with Zorin, I sensed a conflict between the nature of Ultimate as "something for everyone", on the one hand, and Zorin's attempts to sell Ultimate to business users, on the other hand. I wondered, to be frank, "What are the Zorins thinking?" Ultimate seemed both unfocused and out of sync with a marketing strategy selling Ultimate to businesses.

That seems to be changing. Zorin seems to be repositioning Pro toward businesses -- that's what it looks like, but Zorin hasn't said a word about the shift in focus, if there is one -- and Education is now being marketed separately, which also makes sense because Education is not so much a user distribution as a systemic solution for schools.

The problem, it seems to me, is that Zorin has not communicated with the user base about the change from Ultimate to Pro. It did not do so before release, and hasn't stepped in to do so now ("Why did Pro dump the games?" "Is there going to be a gaming release, or is there not?" What apps are included in Pro?" and so on).

The bewilderment and anger expressed in this thread is a self-inflicted wound for Zorin.

Our sincerest apologies for the mis-communication. Zorin OS Pro is an entirely new edition of Zorin OS (see more: Say Hello to Zorin OS Pro - Zorin) which doesn't come pre-installed with the same selection of games that were in Zorin OS 15 Ultimate. One of the main reasons for the deprecation of Zorin OS Ultimate and the change to Zorin OS Pro was to make the system more geared towards use in a professional setting, where a large selection of pre-installed games wouldn't fit in well. In addition, we've heard that more gaming-focused users have an increasing interest in playing the ever-expanding library of games on Steam, which we have worked to better facilitate in Zorin OS 16.

However, we're aware that some Zorin OS Pro users would still like access to the games they played in previous Ultimate editions of Zorin OS. That's why we have made it easy to play these same games in Zorin OS 16 Pro by simply opening the Terminal (Ctrl+Alt+T) and entering the following command:
sudo apt install zorin-os-ultimate-games

We have just now added a notice about this to the Frequently Asked Questions section on the Zorin OS Pro webpage: Zorin OS Pro - Zorin OS