Hello, I'm not sure where the best place to post info about this so it can be fixed is (or exactly what necessary info to post) but I figured I start here just in case someone else has the same issue that I did.

So, all of a sudden this morning my main computer had issues showing my login screen. After several hours of troubleshooting, I had determined that:

Here are some basic system specs:
OS: Zorin OS 16.2 64-bit
Processor: AMD Ryzen threadripper 1900x 8-core processor
Graphics: 2x AMD Radeon rx 5700 xt (They are identical graphics cards and the issue is present on both. Though I did notice that it some circumstances it did manage to display startup text that it loads on every boot but it would hang and never load past it.)

In addition, my OS is on a encrypted partition on a Western Digital 500GB M.2 SSD if that's relevant.

Also, I have noticed something new that when my GRUB loads there appears to be a message that says: " Error: No server is specified" both when it loads and when I click the advanced options for Zorin before the menu that has recovery options and 5.15.0-52-generic appears.

If anyone else is experiencing hanging or no display, my workaround was to use the 5.15.0-52-generic in advanced zorin options in GRUB and I hope that helps. 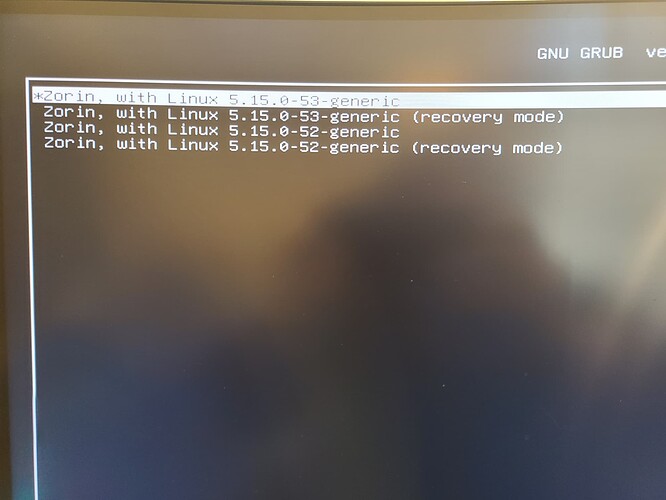 Any assistance or tips on where I need to send this or more info to provide will be appreciated.

If the later kernel has a regression or bug, it is best to revert back to the previous known stable kernel.
You can set it to default boot so that you do not need to do it every time: