[HOW TO] set an older kernel to default boot

You may need to use an earlier kernel than the current kernel used by Zorin. This method allows you to set the kernel that you will boot into by default.

To set the new kernel to default:

Boot into the kernel you wish to be Saved.
Open terminal and run:

Change GRUB_DEFAULT=0 to GRUB_DEFAULT=saved
Hit enter to drop down a line.
Add GRUB_SAVEDEFAULT=true
ctrl+x to exit, then the y key to say yes to save, then the enter key to save as current configuration.

to make the changes take effect.

Remember: if you boot into the later kernel for some reason (testing or whatever), that will become the new Saved Kernel at next reboot. So you must hit tab or esc at the M.B. splash screen to get to Advanced Options for Zorin and reselect the preferred kernel and boot into it. Once done, it will then remain as the Saved Default.

Bigger is not always better, when older and smaller works just as good. 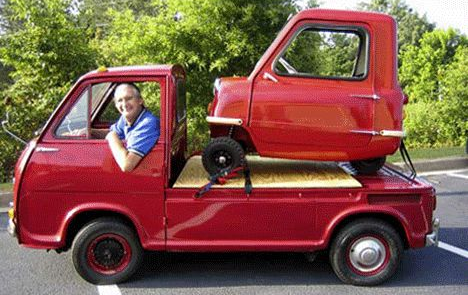 For the curious: Those are Real Vehicles.
The Truck is the Suburu 360 Sambar truck... Looks like a late 1960's model.
The car it is hauling is a Peel P50 tinycar, conceived for use on the Isle of Man and this model also looks to be mid to late '60's.

When the 28 revision came out it caused locking up on my laptop. I rolled back to 27 and the locking up stopped. So I thought there should be some way to make that permanent. I did a search on this forum and found this tutorial. i especially like the change you made to Grub so that whatever is the last version you boot into automatically stays as the next boot in unless I go into Grub and tell it differently.

When version 30 came out I installed it and tried it. Since there was no more problems with locking up I just let Grub automatically boot me back into version 30 from then on. Pretty neat I think.

Thanks for this tutorial.