Kidding, I liked Win98 and XP for their appearance, I just hated their instability (I had to reinstall them once a year and still had BSDs). Win7 is a nice appearance AND stable, but I knew I had to move on, hence going all-in with Zorin.

Win 98SE was a nightmare for me. XP was like a long welcomed oasis that brought a lot of stability lacking in its predecessor. But XP was the end of my love affair with M$.

It was around this time that I tried a Linux distro which was recommended to me (I don't remember the name), but it had an unfinished quality to it, so I didn't actually pursue Linux for many years.

Gave Linux another shot around 5 years ago and I haven't looked back since. I must admit that I was a real Mint fanboy for a long time (and I still think they are a really good option), but the longer I stay with Zorin, the fonder I become of it and the community here is also fantastic which is another huge plus!

I think I'm the same - I liked the UI and stability for Win7. but it was also the introduction of forced product activation. As someone who is against DRM, that was the start of the end for me with Microsoft.

I do not think so:

See when the Windows 7 end of support date is and get help from Microsoft on how to navigate the transition. Learn why Windows 10 might be right for you.

As of January 14, 2020, your computer running Windows 7 will still function but Microsoft will no longer provide the following:

I liked the UI and stability for Win7. but it was also the introduction of forced product activation.

I hanged on to Windows 2000 for almost 10 years.
It was the last Windows which required no activation.

IMO, Windows requirements are far too high these days. Microsoft continues to infringe on people's rights, as they are a total run away monopoly. Clinton was the last president to break up a monopoly in our country. But no president has had the bravery to do it since, and now the corporations are in run away.

Microsoft, APPLE, GOOGLE, Amazon, all of them are completely out of control. This is what happens when government just sits in a chair, and lets the corporations run things, cause thats all we've ever honestly have had for years now. The corporations buy off politicians to keep the status quo.

You know what greedy Microsoft is doing now? They are issuing updates to break Windows 10 systems to get you to upgrade to Windows11. I have an extended family member who I rarely talk to, who has Windows 10 on their PC and won't switch to Linux. If you wonder why I don't speak often with them, you know why.

Well, you'd think the computer case would be grounded with the PSU, and thus the PSU grounded through the wall, cause thats how grounding works. They felt a shock when they touched their computer case, (ESD) and suddenly their monitor screen went to black.

Again, you'd think the case be grounded with PSU to prevent any ESD getting to the motherboard or GPU. Their also been getting updates from Microsoft, as has everybody who has been using Windows10. Microsoft removed their GPU drivers, which forced them to have to re-install them.

Their computer has been completely unstable as heck. They couldn't even plug a set of speakers into their computer's 3.5mm AUX port, without the computer crashing in game and going to BSOD. It just seems to be getting worse and worse.

Even Linus Tech Tips who is a huge Windows user as a part of the company in which he operates with like 20-computers at least in building, even he admits Windows10 isn't stable at all! He's admitted this on his WAN show just as recent as last Friday!

But you watch, as part of company policy, he will upgrade to Windows11 like everybody else, cause people are freaking zombies when it comes to Windows. Microsoft drops a new crumb for the ant, all ants go get the crumb, its a new crumb, must have the new bread crumb!

I want MS company to pay their real fair share of taxes in this country. If they did that, they would be several millions of dollars less rich, cause thats what they owe the government. And that goes for all the other monopoly companies too. Time to pay your fair share of taxes like everybody else.

I split the thread since we deviated a lot from the desktop screenshot thread.

I don't like anything about windows though I use it a lot before. Except that most programs, of course drivers, are available in Windows, I don't like anything about it. Hahahahah. I don't know. Their UI for me is kinda too much. I also don't want to be pestered, just like "Want to try microsoft office?" or "choose one drive" etc. This become more awful having cortana and like logging in requires hot mail. geez.

And you know what scares me? Why did Microsoft release Microsoft Edge for Linux users? Whats the game here? More data sniffing from behind? Well, I say, screw that! I aint installing it, I can tell you that much.

The problem with W7 they out everything from server what working before on W7. Drivers, software, speech recognization, mostly information how to fix are access denied to find any support on Microsoft sides. In 2023 i bet W7 will be not working with anything - some standard open source and GNU license yes. Why? Because they want you buying high price a processors, motherboard, graphic cards, ddr5 and etc. I don't see any diffrents. Virtual world you cannot changed. Games just wrote for some type graphic cards that why someone working better and worst. I heard Valve soon Steam 3.0 on linux.

In 2023 i bet W7 will be not working with anything

I do not know where this 2023 number coming from but as far as I can tell from MS announcement, Windows 7 is not receiving any security update since last year January.

You are right.
I even found antivirus for Win XP:

Get complete antivirus protection for Windows XP – for free! AVG keeps you safe from viruses, malware and other online threats.

Microsoft, APPLE, GOOGLE, Amazon, all of them are completely out of control.

StarTreker. Tell us how you really feel....lol I agree with almost everything you mentioned. You have to keep in mind those companies not only pay off elected officials to keep the status quo, but work hand in hand with one party.

I would assume that most people, if not everyone really liked XP. I put it into VirtualBox recently, but I did something wrong with the 'Activation' bypass and have to try it again. And that's for a couple of old games and programs I seldom use, but want to there for when I want to use them.

My disenchantment hit high levels with the W8 debacle. Although at the time I was still on Vista, and just bought a pc with W10. The whole M$ attitude with W8 began my Linux interest, research. After I found all the packages I would need (Mainly a package to replace MS Money) I converted my Vista pc to Mint Cinnamon, then later XFCE) to give it a test drive. Wasn't that much longer that W10 was off my main pc replaced by ChaletOS, and eventually Zorin Lite.
That's my story... Maybe I should of saved that and wrote a book.....

Ohhhhh, you will find I can be quite passionate when the moment arrives.

I am not a fan of monopolies, nor the game they played as a child, that prepared them for their greedy ill gotten take overs. Yep Jeff, I will tell it like it is.

Ho Ho Merry Jeffness, he's getting fancy with having a go with the Windows XP in the box now.

I think Clippy is getting a little too excited for your return, since he knows all too well, that the last time he was relevant, was circa 2004!

But alas, that wonderful experience that we all remember when we were younger, just wasn't meant to be, when this happened.

If your screensaver is burning down, everything else is gonna melt with it. And I am sorry to say, you will not get to reap the benefits of that Energy Star rating, I think the energy being released greatly exceeds what it was drawing in the first place.

Yes, we all loved Windows XP, we all pretty much agree it was the best OS ever made. But we were forced to move on, and then this happened.

Well, as long as a match is not lit, toasting all the code in git.

I dont miss windows at all, maybe for 2 games that ran a bit better compared to linux but other than that no.

A few days ago i thought maybe i should try if windows 11 can run on my machine...i was thinking...and thinking.

I thought nah i stick with my linux installation

. I dont care if 2 games are a bit less in fps then it was on windows. The fact that those games are running on linux is already great.

Since the launch of zorin os 16 i am windows free. 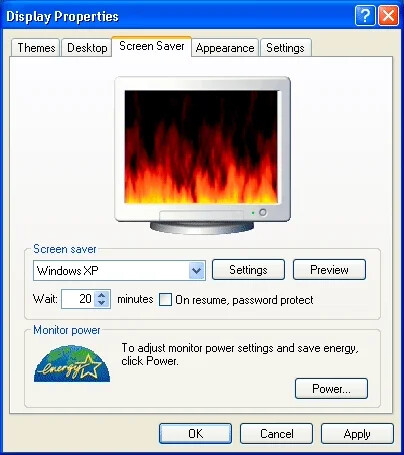 Just make sure the fire extinguisher is not made in Britain, or this could happen.

Kinda reminds me of the anti-virus programs where you can install a trial for free and suddenly you end up with 300 names of viruses they found on you computer .... yea right ...

I started out with Win way back when it was MSDOS and was a loyal fan until you couldn't deny updates any more some where around XP I believe at which point I tried Lindose in fact if it is still around I'm still a lifetime member .... but no-go

After Win 7 I went to 8.1 which as already loaded on a new Acer laptop where I learned if you upgraded to Pro you could bypass the downloads also .... next adventure was Win 10 ... and my new Asus ROG gaming laptop ... again preinstalled and again upgraded to Pro for the same reason as 8.1 Pro .... so I have not excepted ANY downloads from M$ all this time ... I just downloaded drivers from manufactures websites if needed ....

Now I'm am using Zorin full time (when I don't manage to break it) and don't even open Win anymore .... so do I intend to delete Win .... probably not .... as this past experience has shown me that I can at least get to the board to find help when I completely FUBAR Zorin ... LOL

I haven't used Win10 more than a few days the last three months. I only did so to write out my school assignment on M$ Word with ProWriting Aid add-in working. Plus SuperDisplay is truely much more stable and refresh faster.

I am so glad to see so many loyal Linux users in here, you put a tear in my eye

because you all are amazingly stellar

Lets hope more good folks learn the error of their ways using Windows, and switch to Linux. We've already seen a bunch since Windows11 got announced, and we've seen yet more, for those who bought FrameWork notebook's.