For one, I would prefer to not start a new thread with every new product. Especially since I have about 27 of them...
This thread (stickied) is for the purpose of directing attention toward themes, icons or other customization you would like to share.

Out now: Moebius (For XFCE4 or Zorin LIte users, Cinnamon Desktop or Mate): 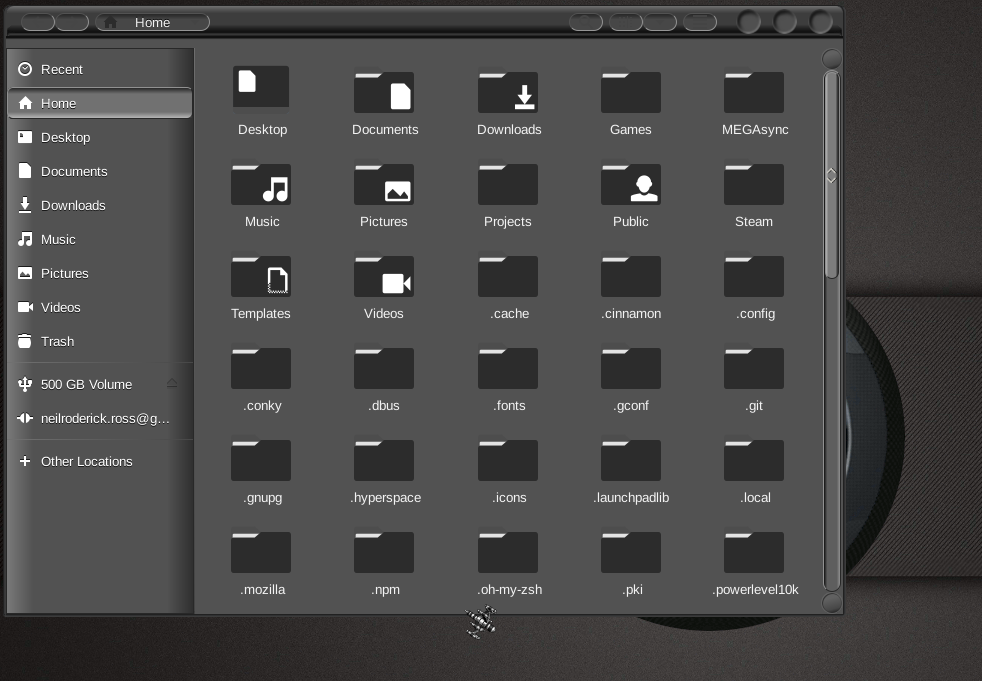 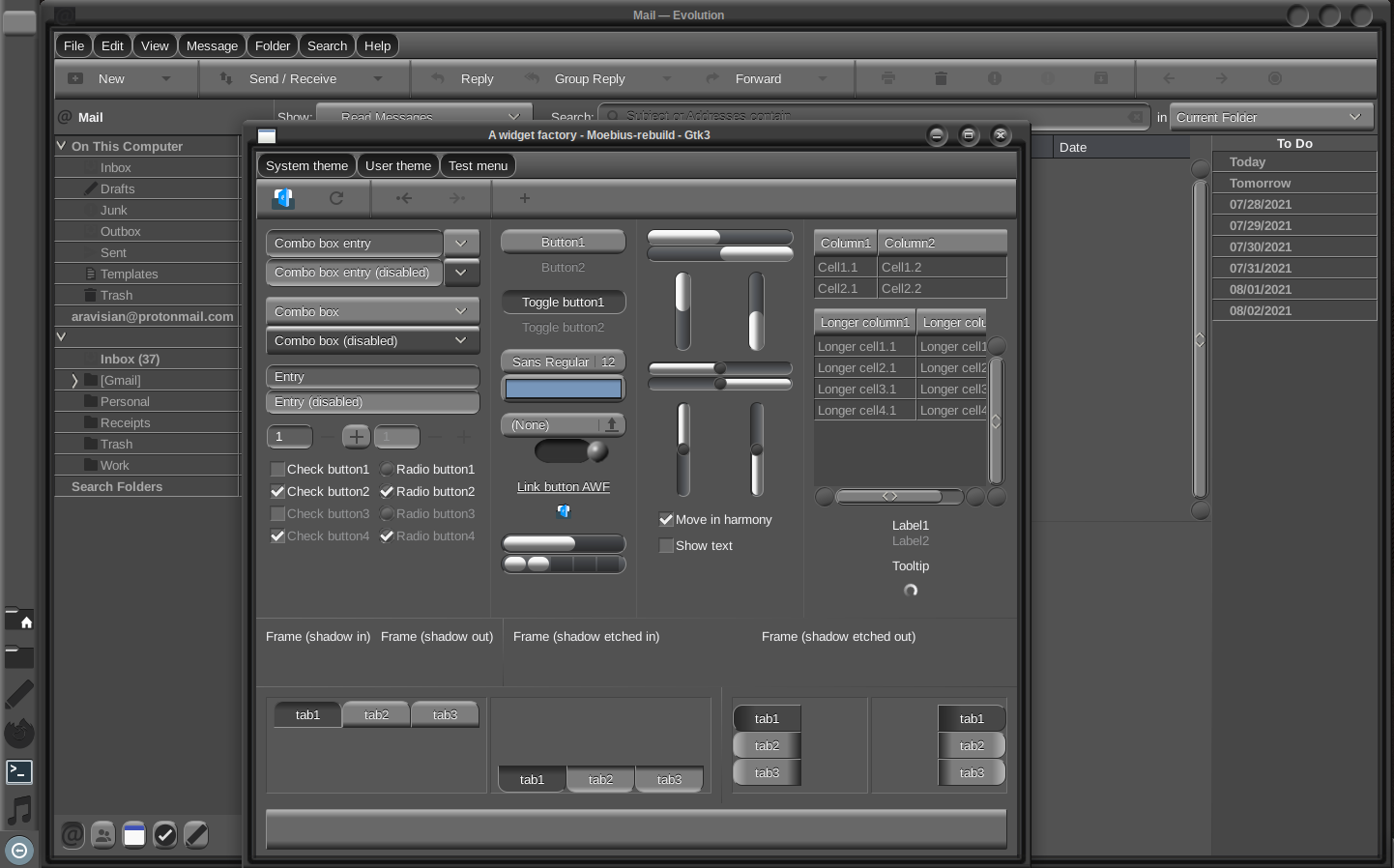 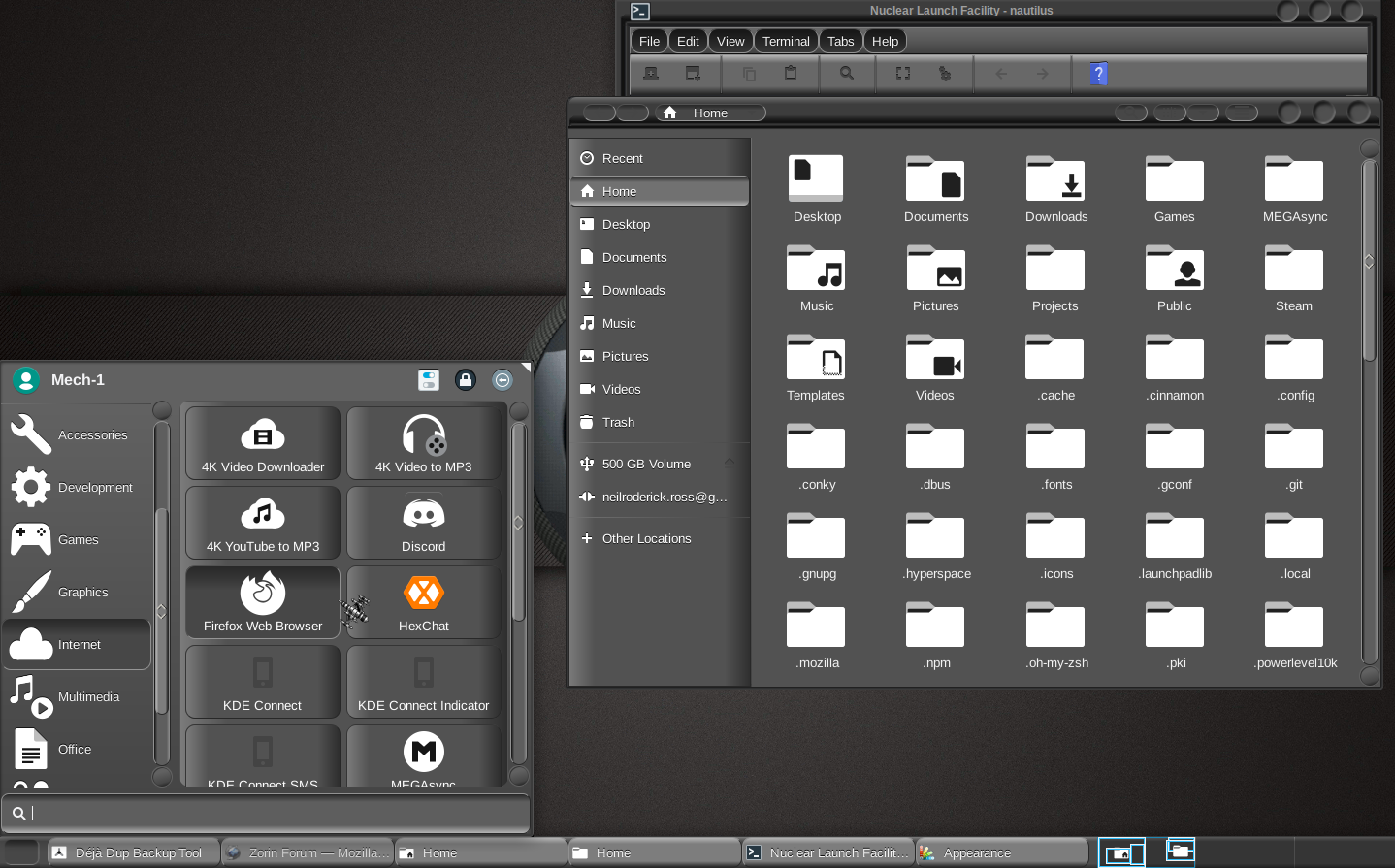 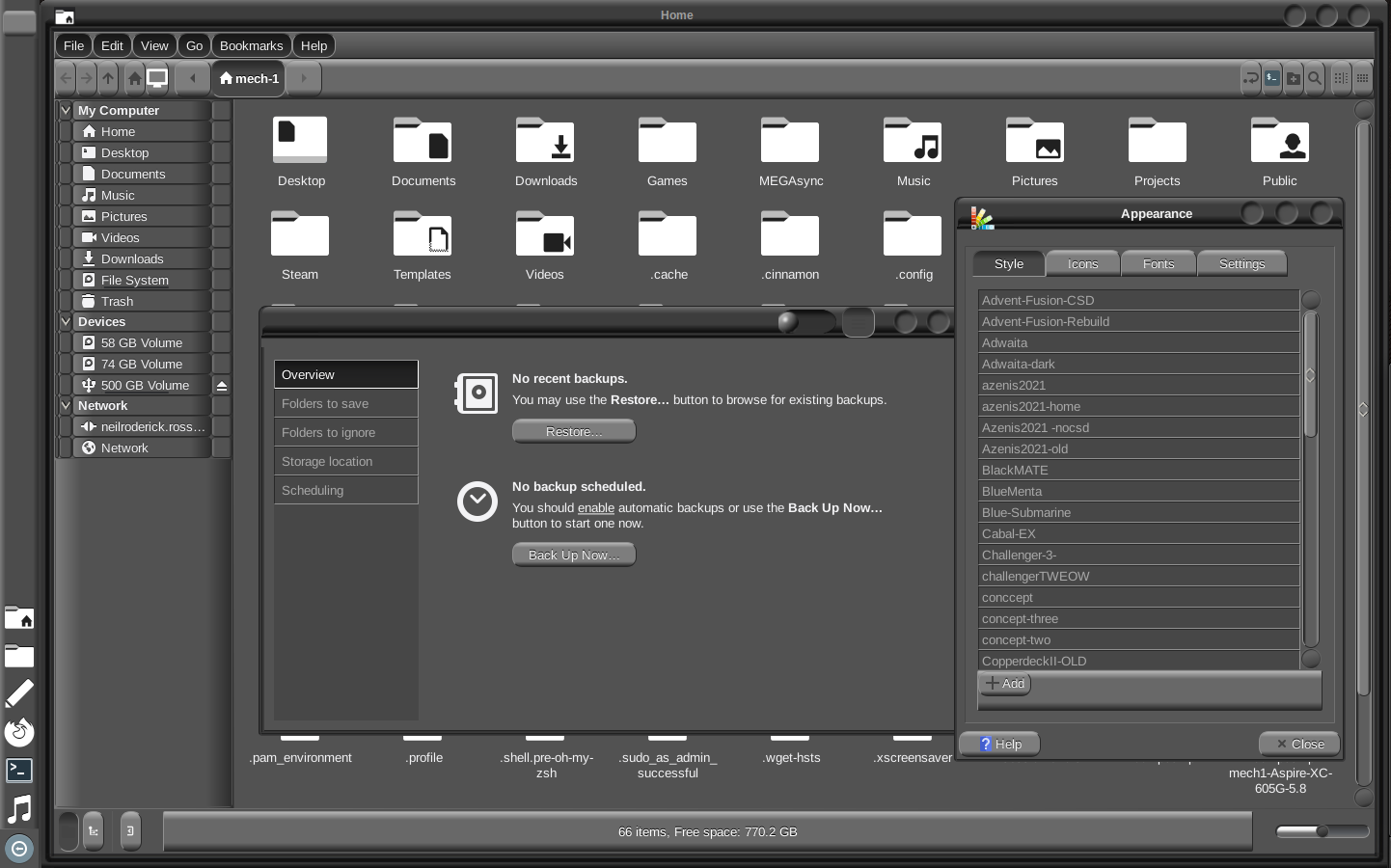 I had originally planned to make a website to host themes and customization. Mitigating circumstances caused me to back-burner that project. Which allowed me enough time to put more thought into it. As such, I have gone for a re-vamp of the idea; Instead to make a webpage that is a guide and tutorial for theming, how-to's, and listing class I.D.'s to help make it easier for Linux Users to make their own themes. And host my themes on PPA, instead. The advantage is in that when I update the the…

Shade of Z is an icon set for Zorin OS (16). It aims to streamline the icons in the Zorin environment, so application icons are in match with the panel icons (menu launcher, systray etc.). Shade of Z is based on Papirus icon theme. 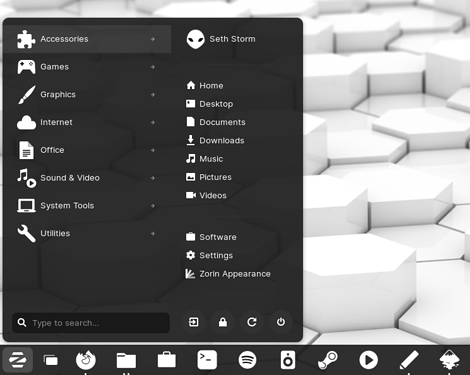 This is a fork of Zorin OS Desktop theme(s) and is modified by me. It adds opacity to the GTK theme and Gnome-shell menus. 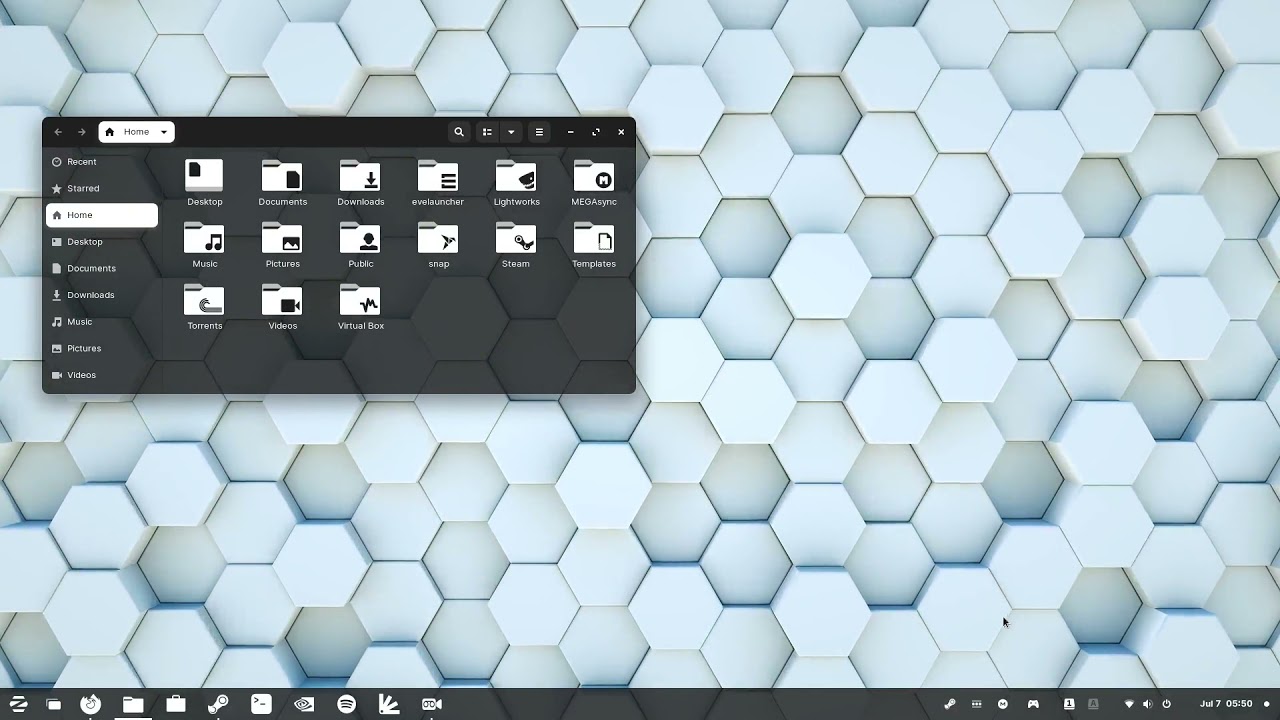 I can see the issues arise. People trying to install a gnome theme in lite, and vice versa... Maybe an explanation of the differences to help people theme correctly is in order..?

I edited it in above.

Yes, I got lazy and took it for granted that my slobbering ravings about Gnome are well established by all in the world...
Part of it is because I am revamping or reworking my Previous work that used to be on Pling.

I got lazy and took it for granted that my slobbering ravings about Gnome are well established by all in the world...

Some of us on here are indeed wary of using words Gnome and Aravisian in the same sentence.
But that is a different story, best kept on its own in this cupboard Xfce vs Gnome DE

But not you, apparently.

You got me on that one. 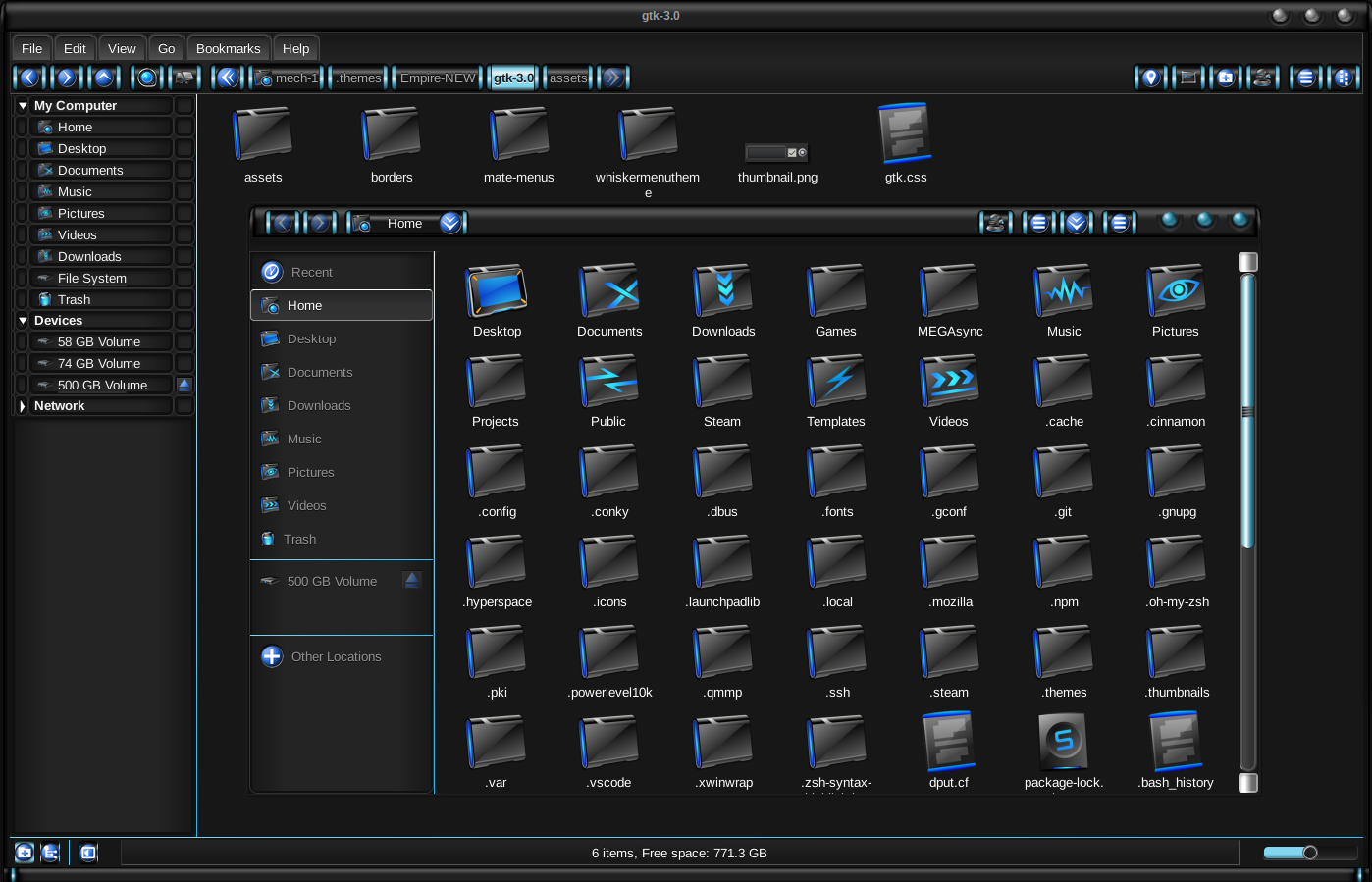 Now uploaded - I admit, the Cinnamon DE really rocks this one (In my own opinion, anyway...)
This has actually long been one of my favorites and I am glad I finally got around to expanding on it, reworking it and improving it.

Coming Soon: Serenity (And a sister theme: Vallis, to follow in the coming week).

The GTK3 in this one is done entirely in .css.
There are no assets or background images. This is... Practice work in gtk Text-Based imagery.

With a few UI changes compared to the screenshot above... Serenity Theme is now Uploaded and available.
The Sister theme (A Light Theme) to Serenty; Vallis may be a bit longer than a week out. Not... that I am anticipating many people are drooling in eager wait for it... but... Just lettin' ya know...

Additionally, a few months back I started an art project on a Prowler Icon theme (To match the Prowler theme, since an icon set for it was never made...) And I got all kinds of carried away. A definite "alien" vibe to it.
If you like knowing exactly what an icon represents at a glance, Prowler is probably not for you.
If you like skeuomorphism eye candy, then you might just enjoy Prowler. I know that I do, because that is how I roll.
I sculpted much of it in Blender. This is for fun and while it is pretty complete, it is not as full as Storms icon sets. in regular daily use, I do not see very many non-prowler icons. I will upload this tomorrow just to have it in launchpad. If you like, grab a copy. But a complete restructuring of this set is in the works so if you install this icon theme, be ready for a major upgrade in the coming weeks. 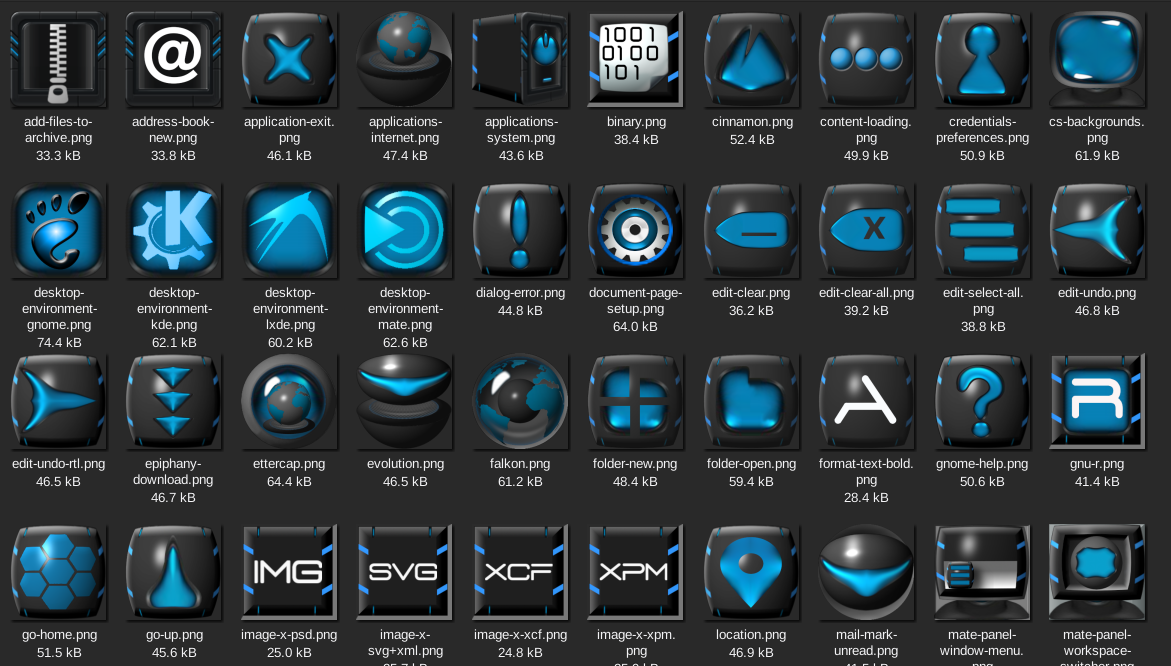 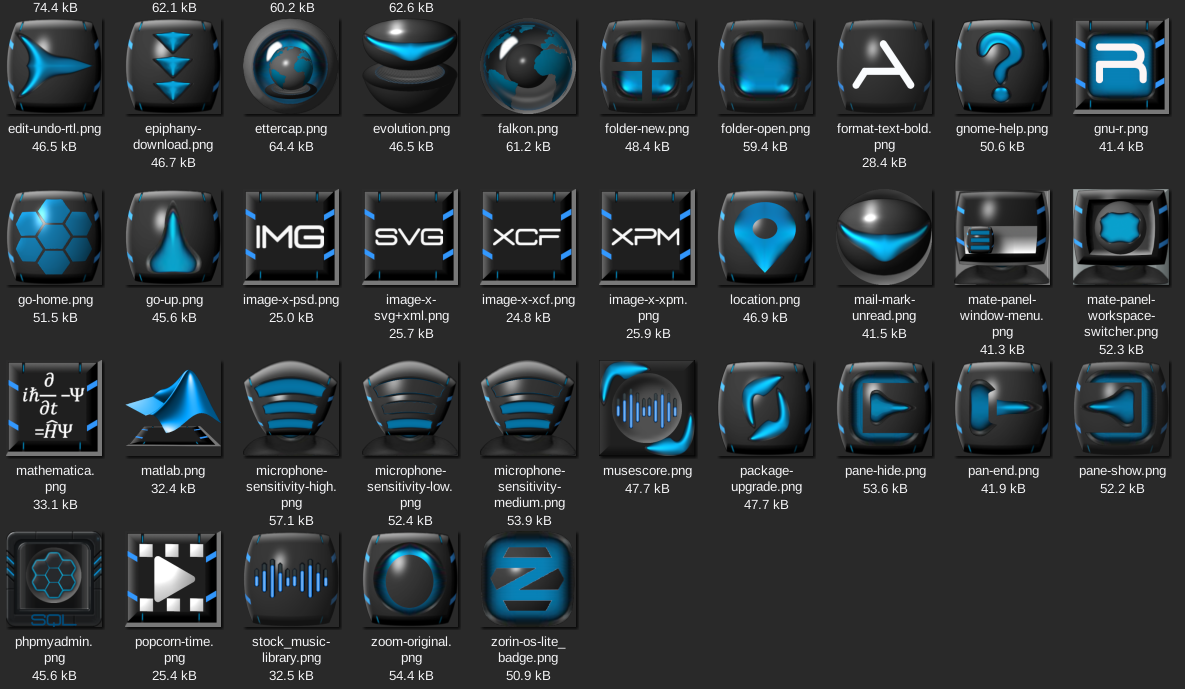 I am too swamped to make screenshots at this moment... But sister theme to Serenity is now uploaded. Vallis is a light(er) theme with golden hues and a more warm atmosphere. Which... for those who have figured out the Name Inspiration - makes it all make sense.

28 posts were merged into an existing topic: Discussing themes, Shameless plugs and Wombats

Released. Mind you- the alien looking things will burn your eyes if you try them...

You can use them for about twenty minutes before you gotta switch back to a calmer theme and catch your breath.

I am too swamped to make screenshots at this moment... But sister theme to Serenity is now uploaded. Vallis is a light(er) theme with golden hues and a more warm atmosphere

Undelayed at long last... Showing Zorinmenu Lite in Vallis and in Serenity. The image below is a Mock Up showing the portions that Highlight when hovered over. They are not always highlighted. 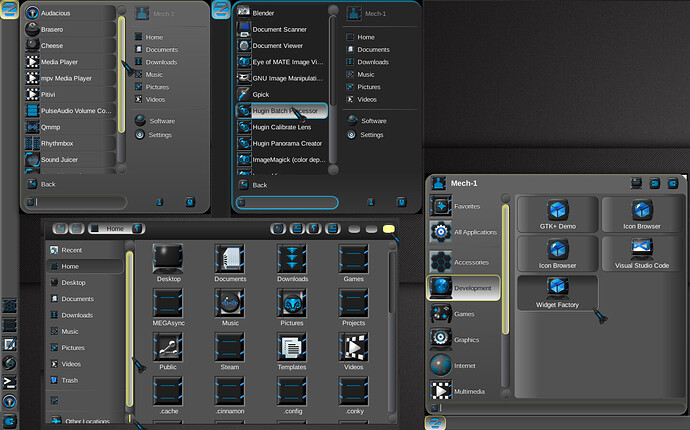 Original concept and design was by vStyler for Windowblinds.
As you can see in the image- I have made many changes for the 2021 Linux Distro version. Partly, this is due to the nature of Permission for Use. I had begun (and mentioned) the creation of a new 2021 version of Prowler and began work on it. The gtk3 portion uses all .css with no assets - Except for the Menu Background for Zorinmenu lite and for Whiskermenu.
During the course of this, I noticed that vStylers Prowler is a Master Skin that costs $4.95. It would be improper for me to port the gtk3 portion of Prowler, in light of this, without asking vStyler for permission. Uncertain, I began making changes to the U.I. in case I needed to preserve the work I put into the .css to build a different theme.
However,
This is for Personal Desktop Use Only as noted in the ReadMe File. It may not be sold or profited from. With this; vStyler graciously gave his permission for me to port Prowler to gtk3 for Personal Desktop Use Only. I decided to leave the U.I. as it is, however, as it respects vStyler without copying, paying homage to his original creation and design. In this, I dub - Prowler2021.
The scrollbar steppers are animated to pop out and glow in use as are many other elements.

Prowler-icon set that I created is noted above.

Coming soon: Machiatto
A light toned neumorphism inspired theme. Can't see it in the picture, but the scrollbars highlight in blue when hovered, the steppers show arrows and stuff like that all kinds of fancy gui pretty pretties.

Coming Soon (Too): Plomb
Guaranteed to make you see red.

Screenshots available in this gallery (Until I complete creation of my own webpage). 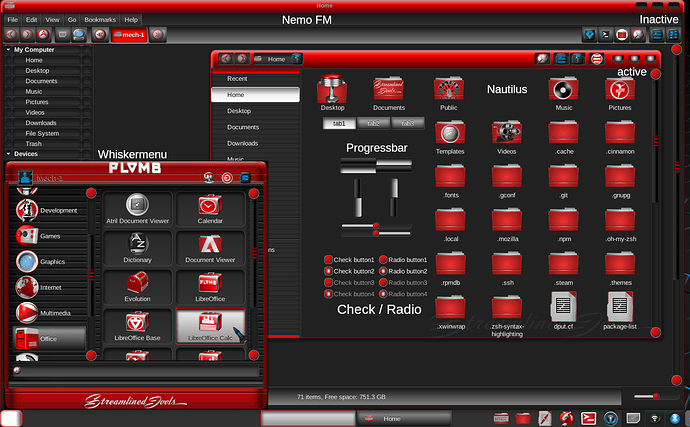 NOTE: I have not yet finished the IconSet for it- which is why some of the icons visible in the screenshot are Prowler Icons.
Uh... Coming soon... Plomb Icons...