I’ve had Z15 Gnome (dual boot) on my desktop since I fled from Windows (3 years ago if I recall). I decided it is time to go Z16 Xfce.

Asus rampage 2 extreme (yeah, pretty old) has no USB boot and I’m too lazy to fix the DVD drive (dang drive band keeps breaking so I use my endless supply of silly bandz I inherited from my nieces). Long story short, I had installed Z15 on it using Unetbootin’s option to run off the image from one OS to install on the other (love them for offering that).

But now that I’m in Win 7, I thought “why not run some last updates?”
“Only 74 MB updates? Sure. Oh, and Zonealarm needs to update too, sure.”
The Win 7 update failed and Zonealarm is still running.

I shouldn’t complain. Could be worse. I could be using an Apple product (other than my work phone on which I’m typing this cause I’m too lazy to go to my laptop).

Have you tried the script that stops telling M$ or rather M$ telling you that your OS is out of date? That is what I did to get my updates through on Windows 7 Pro 64-bit but it is on a shelf at the moment. I only used it to run Affinity Apps on it and hardly ever used them! D'OH! 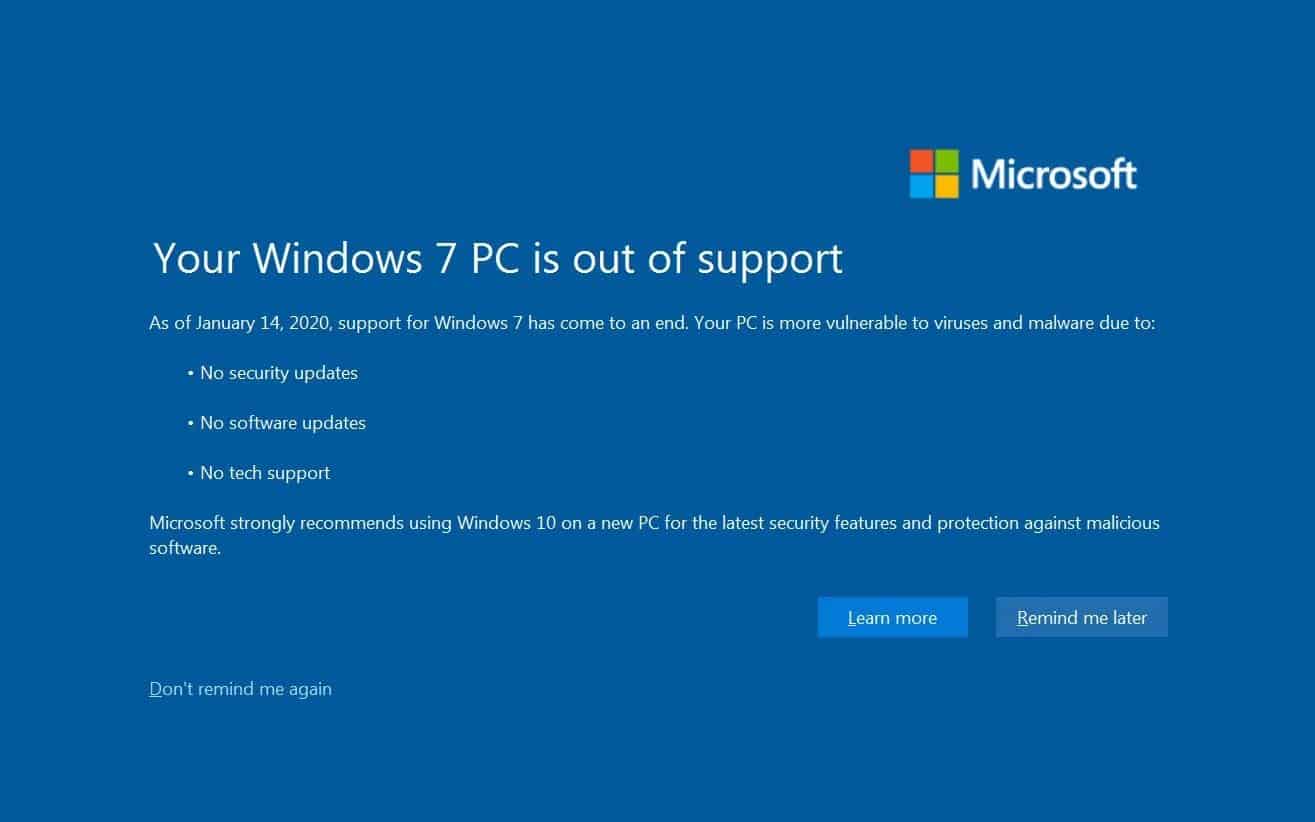 How to disable the "Your Windows 7 PC is out of support" full screen popup -...

Microsoft plans to inform users of the company's Windows 7 operating system on January 15, 2020 that support for the system ended.

Worked great except one day a notification slipped by. Was just a little window but I was annoyed enough by it to migrate permanently.

For update issues these guys were very helpful when I was still on Windows: Sysnative Forums

I’ll keep your suggestion in mind but it may be a long while before I get on Windows again. I only use my desktop for long term storage (rarely booted) and only ever boot in Windows if i absolutely can’t get something done in Linux. For example, when my work phone had an update snuck-in by Apple, it crashed the phone. iTunes only runs on Windows and I barely got it fixed.

I'm thinking of going back to an older version of Win on my dual boot dual drive laptop .... I'm presently running Win 10 Pro .... the only disk I own of windows is XP Pro .... would it be better to have Win 7 .... I only need a stripped down version of Win to play games on ... I have to many to just dump them and use Stream on Zorin ...

I already have a back-up of my C drive using Rescuezilla in case something goes wrong with it during the switch ..... the C drive is a 230GB SSD so I shouldn't have problems running games on it and using my DVD player (yea some games are that old LOL) .... the majority of my saved games are on 2 1TB external HD's

I had thought of that some time back. I too have old games. The problem are drivers. The newer machines have hardware that don’t have appropriate drivers for older OSs like XP. My wife had an old laptop that ran on vista or 8 (can’t remember which one). I had tried XP and it ran very bad.

Post Linux migration, through enough perseverance I found that Wine can run older games easier than Windows OSs could. If there are some older games you’re having problems with, let us know specifically what you tried and what errors you get and we can try to figure them out.

Thanks carmar ..... I would rather not install Wine on my Zorin hence the reason for the dual boot .... back when I used Win 8.1 I found a work-a-round for older games that wouldn't play on modern machines and I still have that some where ....

My younguns had the interactive Petz program - didn't work after migrating from XP to 7 - but worked in Zorin under wine! LOL!

Not to worry as I plan on removing most of the programs that I won't need starting with the top heavy ones like Office and some others .... going to keep it to bare bones and only use it to play games on ....

I have 7 Pro on an old HD laying around here some place from my old home built gaming desktop and a USB docking station so I can play with it a bit before loading it onto my internal SSD drive ....

Can't get them to work in linux ?

didn't work after migrating from XP to 7 - but worked in Zorin under wine!

Well linux can play those games without any problems

Look how nice halo 1, halo 2, and halo 4 runs. The reflection on the guns and so on, everything works great if not better then on Windows. I read somewhere that users have issues to run the halo masterchief collection on windows 7, while it is supported they run into issues. Well i hate to say it...but...but...they run very well with linux

No to be honest I haven't really tried to run anything on Linux with Steam .... in fact I have never used Steam as they don't like Nexus and I do like to customize .... kinda like I do in Zorin .... and I'm afraid that most of my games are modded .... and I only play first person and never on line .... but as I say different stokes for different folks ... LOL

No to be honest I haven't really tried to run anything on Linux with Steam .... in fact I have never used Steam as they don't like

Please check this. Lutris is the tool you need.